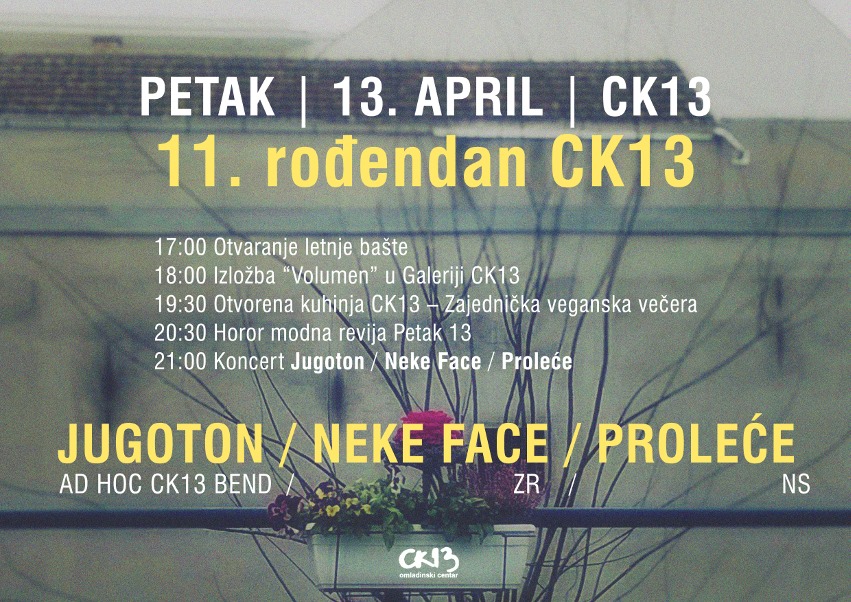 We invite you to celebrate 11 years of existence and work of the Black House together!

And for this birthday a musical program is waiting for you, the Gallery CK13 will be officially opened, and we will also prepare numerous surprises.

The entrance to the concert is based on voluntary donations that support the work and development of the Black House program.
_________________
The Youth Center CK13 was opened in 2007 as an alternative and educational space, intended to encourage and develop social engagement and political activism of young people. The Center is based on the principles of self-organization and self-sustainability, and the space is used by other organizations that share our values.

Given that we live in a time dominated by strong individualization and consumerism, and public policy and youth policies are directed to supporting creative industries, entrepreneurship and spectacular events, while usurping potential sites for the construction of new autonomous spaces, we all need more non-commercial spaces of sociability and open structures that will not only enable but also encourage collective experiences and work together.

———–
Gallery CK13
By heading Io Sivertsen “Before I Fall Asleep” in March, the CK13 Gallery opened as an exhibition space open to new or non-dominant artistic and curatorial practices. The program orientation of the CK13 stems from the specific role this space occupies in the wider organization of the Youth Center CK13. It is a room for a night, residential residence of visiting domestic and foreign artists, performers, lecturers, activists. By converting to the gallery space, while retaining the occasional residential function, the space becomes in the true sense of the gallery – in the sense of ‘passage’ (lat. Gallery) – and becomes contemporary, artistic and conceptual just as a place of intimation and examination of aesthetic and conceptual aspects of contemporary art and the conditions of its creation (issues of living space, space for a night, work space, exhibition space, space for opinion).

On the occasion of the birthday of CK13, the exhibition “Volumen” will be exhibited – a poster of various programs held in CK13 in the past 11 years – where the poster does not present itself as a form of public inscription and information but as the ‘volume’ of the cultural space.

———–
Free store
For a few years now, the Black House has been operating in the Free Store. This is an action in which money is worthless and is not based on profit, but on giving, exchanging and sharing. It was created in response to ubiquitous hyperproduction and represents an alternative economic principle, with the aim of not ending old things in a container, but in someone’s closet, shelf, room. Since last summer, in the yard of the Black House, an exchange cabinet has been installed that works according to the same principle. In previous years, at least once a month CK13 organized Žur buvljaci, benefit bazaar and CK-nd hand sales, and for the birthday we are preparing a horor fashion show, in which participation can be taken by all visitors, with the only condition being that the clothes be from our Free Store or Exchange Cabin Exchange.

———–
Open kitchen CK13
Open kitchen is a self-organized, self-sustaining, activist and vegan cuisine that functions as a collective within the Youth Center CK13 thanks to volunteer engagement and your donations.
In the open kitchen, we prepare vegan food, as the production and use of animal products, such as meat, milk and eggs, includes enslavement, forced reproduction, torture and executions of animals, exploitation of the environment and pollution of the environment. We prepare joint evenings in the middle and as an opportunity for people to socialize and meet each other.
The event is intended for anyone who wants to taste a variety of vegan dishes, join in the preparation of vegan food, learn more about veganism, meet and talk to people with whom they will sit at the same table.

__________________
In the music part of the program will be performed well-known Novi Sad punk band Proleće (band), as well as Zrenjanin ska composition Neke Face.
Within the birthday evening, the Ad hoc CK13 band Jugoton will perform, which will surprise us first with their repertoire, so come on time in order for you to miss nothing!