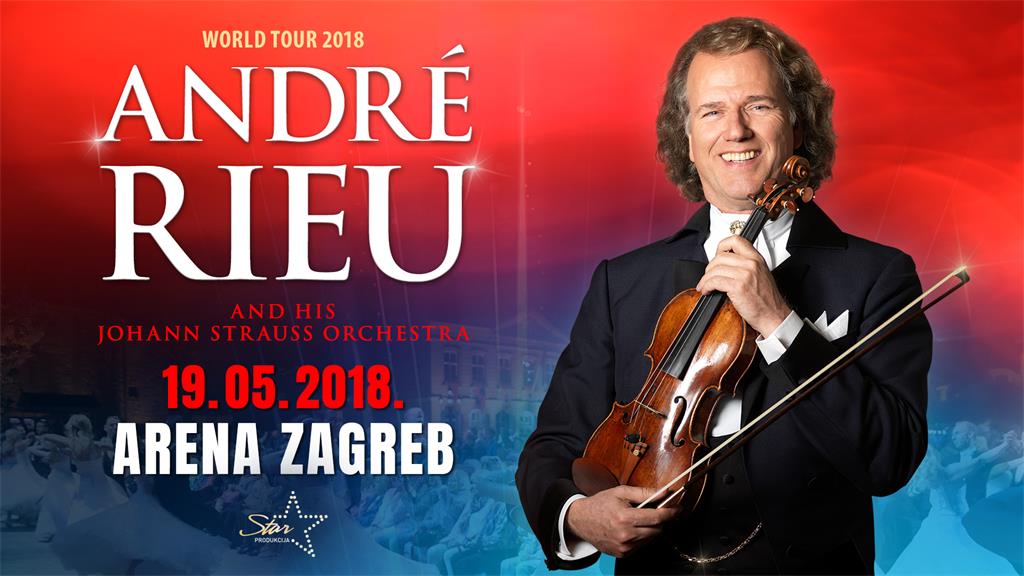 Andre Rieu
05/19/2018
Only a few months after an exceptionally successful performance, the megapolitan conductor and virtuoso on the violin and his Johann Strauss Orchestra announced the return to Zagreb Arena

The thunderous applause and ovations for nearly 10,000 fans this June fell one of the world’s greatest musical sensations! Andre Rieu and his biggest private orchestra in the world will again perform in Zagreb next May. It is a news that will greet the numerous fans in Croatia and the countries of the region who filled the Zagreb Arena and enjoy the appearance of the charismatic Dutchman.
“I’m really looking forward to returning to Croatia again. Our first concert in Zagreb is one of the ones that my orchestra and I will remember forever, and the love and enthusiasm of the audience were fantastic. We hope you will join us again in the evening that is not forgotten, “said Andre Rieu.
Evenings with André Rieu have become known as a place of world-famous romantic melodies, interesting surprises with many humor and top soloists. Rieu’s charisma, passion and vibrancy make his every show a unique experience. Since its foundation until today, the Johann Strauss Orchestra, which celebrates its 30th anniversary this year, has become the largest private orchestra in the world with 60 members and has launched a kind of world renowned valcer. Also, figures behind Rieu are more impressive: 40 million sold albums, performances that scrutinize as many as 600,000 fans annually, and topping the Billboard chart of earnings from the 2013 tour when, with Madonna and U2, Justin Bieber left behind.
“After such a positive reaction from the audience, the return of Andre Rieu and his musicians is not a big surprise. Music lovers have recognized the great efforts and top production, and we are proud that these top musicians, after the world tour in the US, UK, Germany and Mexico, will be brought back to Croatia “- said Star Production producer Alen Ključe.
Romantic waltzers, musical themes from movie classics, operas and operas, and the processing of traditional songs in the performance of the “King of Waltzes” and his orchestra will again be able to be heard May 19 at the Zagreb Arena starting at 20.00. Tickets for the announced spectacle can be purchased in Eventim. Visitors who want to book a hotel accommodation can do so via the link www.andrerieu.com/en/travel.
Under the slogan of great music, Rieu attracts all age groups and nationalities. Join us too!