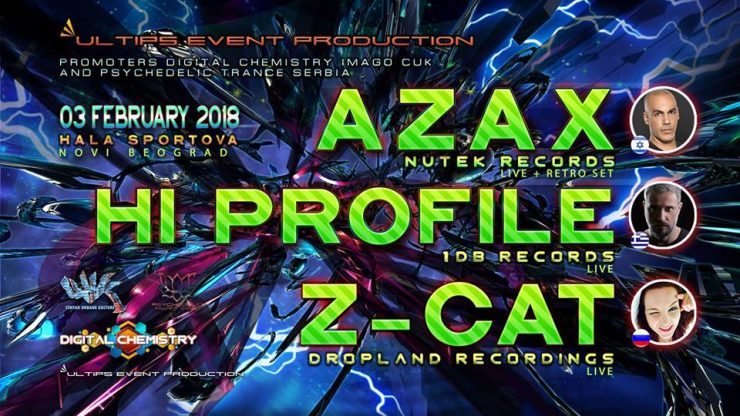 Azax is Regev Azaria from Israel. One of the leading top artists of today, with a unique style of music, known as “Power Trance”. Playing his music worldwide over a decade, and the owner of many tracks that become milestones in the psy-trance evolution.
His musical background is heavy metal, as a lead singer in a metal band at the early 90’s. Later he started to collect and play psy-trance music, and at 2003 his debut album was published, and was considered by many as revolutionary. Later he released 3 more albums, and many more tracks, at various labels worldwide.
During the years, Azax played at every Major stage world- wide, gaining many followers and fans from all over the globe. As a producer he is always looking forward to innovate, and to create a new format of sound.
Future plans for the upcoming year is a new album, and many releases at various labels…

Tassos Antoniou is responsible for this astonishing act. Born and raised in the capital of Greece Athens and introduced to trance at the age of 19. Tassos was invited on a variety of radio shows and developed an interested ear for the music. 2002 found Tassos in one of the biggest Greek record shops which was a huge impact for him giving the vibe to start his first imprints. Over the next two years, many memorable live acts and DJ sets took place, and in 2004 he got his first clean cut. Trying to bring a new perspective to the music, he managed to separate himself from the vast number of other producers and developed his own originality. His music is full of enlightening atmosphere, progressive baselines, fat kicks and dazzling FX. Tassos saw his carrier rocketing rapidly, taking places to numerous fests and involved more than ever in the club scene . Giving him the opportunity to collab with some of the hottest players around like Liquid Soul, Symphonix, Egorythmia and more… More recently in 2011 he was on the infamous MVPsyprog top 5 psyprog artists so this sweet burdon and hard work will bring only further success to this fella.

Yana was born in the capital of Russia – Moscow. Her psytrance journey began in 2003. Since 2005 till 2007 she was a resident of one of the biggest Russian promotion group Synthetic Dreams. In autumn 2007 she joined one of the leading Psytrance organization TLN Promotion. Collecting all the experience and skills, Yana decided to open her own solo project – Z-CaT. She was engaged in writing music with the new concept of combining twisted rhythms and thin vocals. Her tracks always have special ideas, like small stories. In 2009 she released her EP “Awaken Stories” on portuguese label Ultravision Records and she started traveling and performing. She released many of her tracks on different Compilations and labels like Goa Records, EDM Records, Kaos Krew Records, Psyshark Records, Geomagnetic and others. In 2010 she was awarded for the contribution to the development of electronic music in Russia and as The Best Psytrance Dj in Russia.
In 2011 she joined Akida Bookings, international booking agency and after years of travelling and blasting around the world, Z-CAT released her debut full album “REFLECTED” in June 2013 from South African label M.M.D. Records. Nowadays she is creating new night time psychedelic stompers for different labels and joined Dropland Recordings. Dropland Recordings is an electronic music label based in Barcelona and Ibiza, specialised in psytrance and all its styles. The new Z-cat upcoming release, Ablaze EP will be released by Dropland on 28 May 2014! Z-Cat, has taken the global psytrance scene by storm, implementing a more globally accessible interpretation on psycho-delics, incorporating elements of night psy, melodic, and even her own vocal samples, giving herself a more unique punchy spin on the genre. Euphoric full power psytrance with a feminine twist! She played at numerous clubs, open air parties and festivals around the world, in countries such as UK, Portugal, Greece, Turkey, Hungary, Sweden, Israel, Belgium, Guatemala, Romania, Italy, Russia, South Africa, Mexico, India and festivals like Vortex Festival (South Africa), Paramnesia Festival (Mexico), Aurora Festival (Greece), Free Earth Festival (Greece), Transylvania Calling (Romania), Elemental Evolution Festival (Turkey), Rounders (Mexico), Sun Reload Festival (Mexico), Ultra Music Festival (Russia), Universe of Stars (Russia), Natural Experience Festival (Mexico) and others.