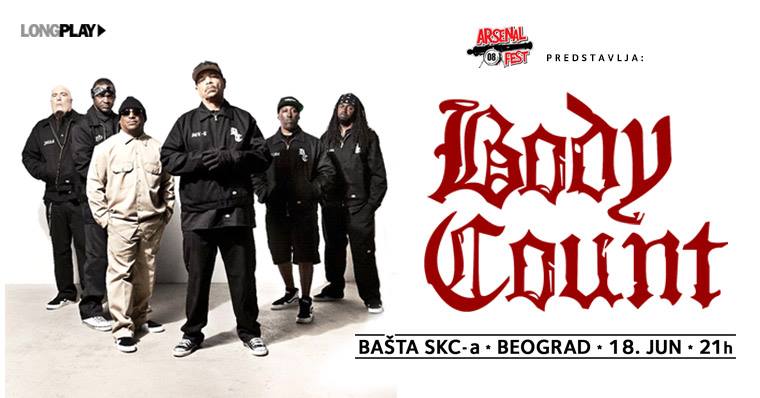 The legendary American hip-hop metal band Body Count will perform on June 18 (21:00) in 2018 in the Garden of the Student Cultural Center (SKC) in Belgrade, within the concert series “Arsenal Fest presents …”

The Belgrade Concert of Body Count will serve as a warm-up and a great introduction to the Arsenal Fest 08, which will be held on June 21, 22 and 23, 2018 in Kragujevac.

The ticket for Arsenal Fest 08 represents … Body Count in Belgrade costs 2.000 dinars, and the pre-sale starts on Tuesday December 12 through the Eventim network.

In the early nineties, Body Count was joined by hip-hop, metal and hip-hop schoolmates by Ice T and Guitarist Ernie C, and the band was already notorious at the very beginning, mostly because of
problematic songs “Cop Killer”. An avowedly intrigued thing about police brutality has come to public convictions, joined by even US President George Bush Stariji, so it is
In the end, she had to be removed from the first album “Body Count” (1992).

Ernie C and Ice T (who for many years played a police officer in the TV series “Law and Order: Special Victims Unit”) continued to lead the band, with frequent changes to the rest of the line, through several hired albums, the singles “Hey Joe” , “Necessary Evil”, “I Used To Love Her”, “Talk Shit, Get Shot”, “Relationships” …

Body Count in Belgrade will come with the album “Bloodlust” (2017) behind “No Lives Matter”, “Black Hoodie” and “Ski Mask Way”, and it also includes the classic legendary Slayer – “Raining In Blood”. In addition to that, the status and reputation that Body Count enjoys in the world of metal show that the album is hosted by frontman Megadeth Dave Mustaine, co-founder of Sepultura Max Cavalera band and singer Lamb Of God Randy Blythe.

The Belgrade audience will present themselves in the Garden of SKC on June 18, as IceT says, “the band is in full force, which this album shows.”