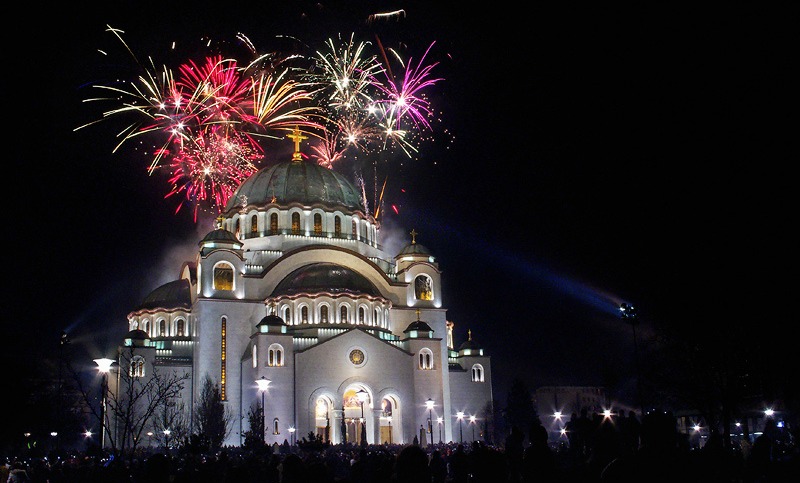 The manifestation “Christmas village at the Temple”, prepared  a rich program for the visitors, will be held on the plateau in front of the Temple of Saint Sava in Belgrade from January 4 to 28. 2018.

During the event visitors will have the opportunity to enjoy the performances of children and church choirs, to ride a fiacre around the temple, find different gifts, handicrafts, souvenirs, ornaments, traditional specialties and attend many other activities.

The manifestation will be opened by the patriarch of Serbian Irinej, who will share the gifts with children, and the program on the first day of the event will continue from 18:00 hours with the performances of the children’s choir “Rastko”, the quartet “St. Roman” and the ethno group “Trag”.

On the day of Christmas, for the first time event lomljenje česnice will be held on the plateau in front of the Temple of St. Sava, organized by the Union of Bakers, starting at 12 PM.

During the manifestation will be performed by a large number of famous music performers such as Sergei Cetkovic, Aleksandra Radovic, Jelena Tomasevic, Lena Kovacevic, Dusan Svilar, the group “Neverne bebe” and others.

In addition to the music program, visitors will also have the opportunity to view different theater performances, exhibitions and films.

City manager Goran Vesic said that this event is being held for the first time this year and expressed the belief that it will become traditional.

– The St. Sava Temple should become a place where the citizens of Belgrade, especially children, gather in January. For us, this temple is important, not only for religious reasons, but because apart from Kalemegdan and Skadarlija, it is the most visited place for foreign tourists in Belgrade – said Vesic.

He said that a large number of programs were intended for children and thanked everyone who participated in the organization of the event.

– So far, we marked the Serbian New Year with fireworks. That’s nice and we will continue, but that’s not enough. I think

Deputy Mayor of Belgrade, Andreja Mladenovic, said that “The Christmas Village at the Temple” is part of the New Year’s “Belgrade Winter” event that began on December 1 and will last until the end of January.

He added that in this way, a series of religious holidays will be celebrated in January: from Christmas Day, Christmas, St. Stephen, adoring the Orthodox New Year, St. Basil and marking the day of Saint Sava.

“Christmas Village at the Temple”, in cooperation with the Temple of St. Sava and under the auspices of the City of Belgrade and the City Municipality of Vračar, are organized by companies “Color Media Communications” and “Ninamedia”.

Mayor of Vracar, Milan Nedeljkovic, expressed his satisfaction with the event.

V.d. the architect of the St. Sava Temple Archimandrite Stefan, speaking about the program, said that all the visitors would be able to enjoy it.

– We have made sure that these events are for everyone, for young people, for the elderly, believingly, for tourists who will come to Belgrade. There will be plenty of happening in the crypt of the Temple, something will be in the Parish House itself, and most of the contents will be on the plateau in front of the Temple – he added.

Participants also addressed the Public Diplomacy Coordinator of the Embassy of the Republic of Poland in Belgrade Joan Budisin, who took the opportunity and invited everyone to visit the exhibition “Iconostasis of Light” by Polish author Adam Stalloni-Dobzhanski, which is part of the program of the event.

The exhibition will be opened on January 17 in the Temple of Saint Sava, and it will be the installation of a stained glass with Orthodox icons, she added.