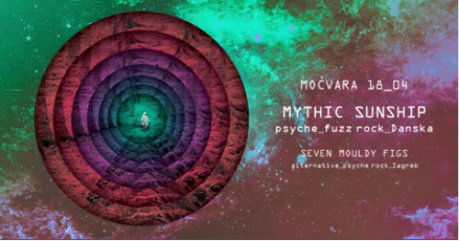 As part of the spring European tour, the psyche band Mythic Sunship promotes its third studio album ‘Upheaval’ with its first appearance in Croatia. The alternatives / psyche rock band Seven Moldy Figs from Zagreb will perform as a support from the Copenhagen team.

The four-time instrumental band is coming to Zagreb for the first time as part of a European tour promoting its 3 albums, called ‘Upheaval’, released on El Paraiso Records, a label that has emerged as part of the long-standing work of the band Causa Sui.

Mythic Sunship plays an improvised / long form rock inspired by jap / kraut / space rock, free jazz, stoner and other genres, and is the result of a combination of powerful jams intertwined with repetitive psychedelic shapes.

As a permanent member of the underground scene in Copenhagen, they are described as one of the most interesting bands of the European psycho scene, and have been performing all over the planet and playing with Moon Duo, Causa Sui, King Gizzard & The Lizard Wizard and many others.

Seven Moldy Figs (7MF) is an alternative rock band from Zagreb. It was founded in 2012 and has been active since the third month of 2013. With some changes to the set, the band in the summer of 2014 becomes a trio and continues in a slightly psychedelic direction.

Laura T. (drum / back vocals), Laura M. (bass / back vocals) and Lucija (guitar / vocals) have two EPs and Labyrinth album (September 2016), which deserves a large number positive reviews in the Republic of Croatia and the region.

Behind him are many concerts in Croatia, Slovenia, Austria, Sweden, Germany, Switzerland, Serbia and Bosnia and only perform authoring songs in English.