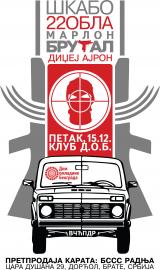 Boško Ćirković Škabo, a member of the Belgrade Trade Union group, and his brother Žobla (Blaško Gavrić) recently released the new album “Kalaši i nive” in the form of an audio cassette in the issue of Škab’s house “Magmedia”. The (Ne) expected interest of the audience brought this issue to the title of best-selling cassette in the short history of the Republic of Serbia. So we come to this magnificent event at the Club of the Belgrade Youth Center: a reunion concert of the group “Fantastic Four”.

On Friday, December 15th, starting at exactly 10 pm (the door opens two hours earlier), DJ Iron (also a member of the “Belgrade Syndicate”, the legendary Marlon Brutal and the aforementioned Žobla and Škabo will remind the Belgrade audience what a real performance The occasion is the celebration of the previous success of the album “Kalaši i nive”, in which the creation of all four participated, but also the announcement of future joint achievements.