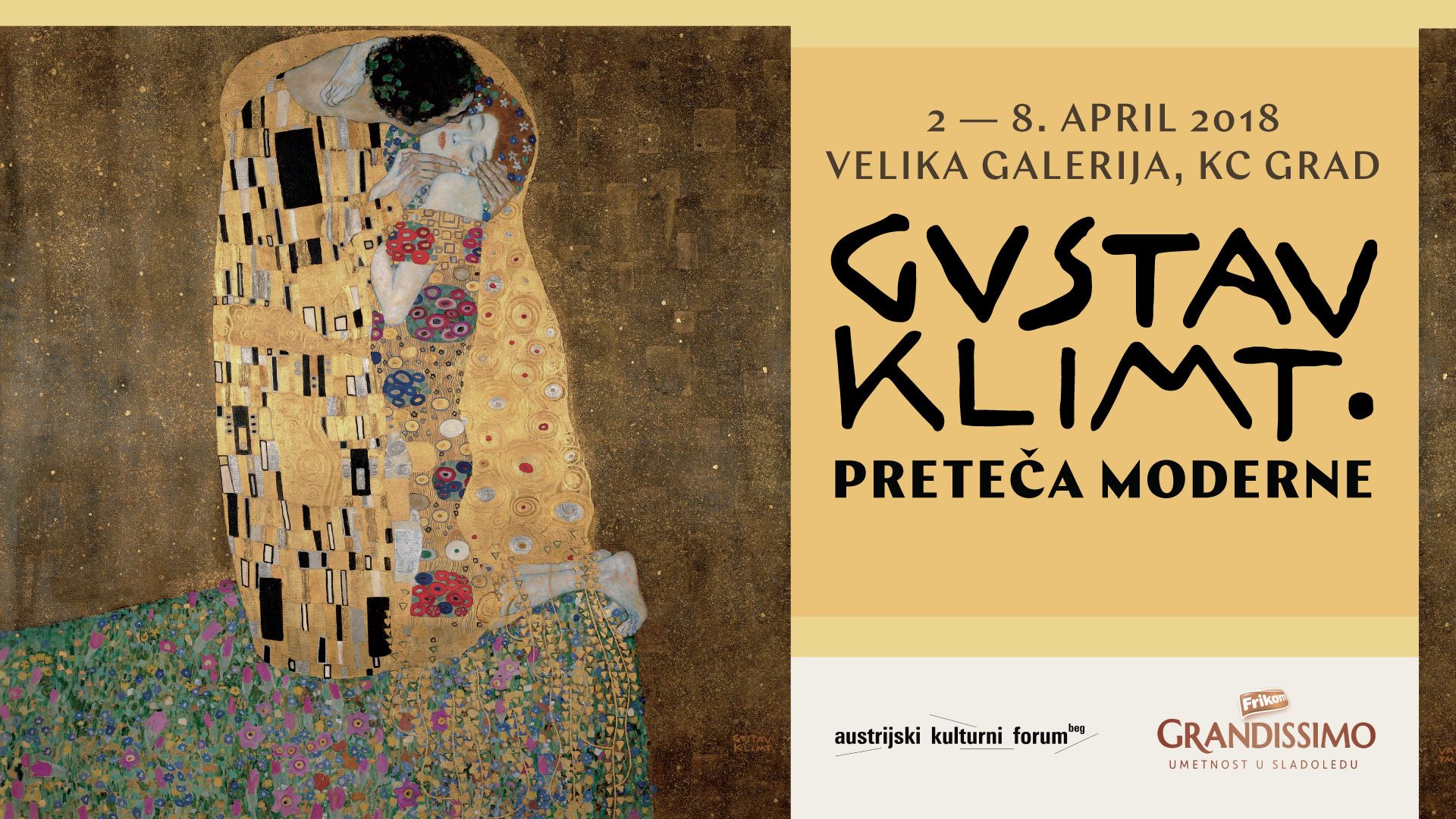 In collaboration with Austrian KulturForum in Belgrade, and with the support of Frikom we are opening a special documentary exhibition titled Gustav Klimt, Modernism Predecessor, on Monday 2 April at 8pm. This year marks a century of Klimt’s passing away, and the exhibition is celebrating the artist’s legacy through records of the most important events of his as well as the artistic life of Vienna on the turn of the century.
More than a century ago, in the last decades of 19th century Vienna was one of the artistic capitals, with its society favoring classical art and eclecticism of historic styles, up to the point of oversaturation. A prominent figure of that society, Klimt, started as a decorative interior painter along with his brother Ernst, executing interior paintings and decoration for several state palaces and buildings. Klimt was also feeling that classical art saturation and was tired of repetition, thus in the year 1897 he has left the Viennese art association and established his own, Wiener Secession, aiming to transform and modernize art in the Empire. At first criticized and denied state commissions, Klimt has slowly attracted the intellectual elite of the Habsburg Empire, the elite who is also hungry for change and modernization. Such people became his patrons, and Klimt became a portraitist and landscape painter, creating the Art Nouveau/Secession style which is breaking up with classical eclecticism and implementing modern artistic expression.
The exhibition explores Klimt’s relationships with women, especially the mysterious friendship with Emilie Floege, one of his important muses for paintings and photographs, and the model for his most famous work, The Kiss (where Klimt included himself kissing Emilie). Floege was a business woman, a modern woman, a designer of then revolutionary clothing line, which enabled free movement, discarding corsets and ties for a flowy natural silhouette, while Klimt’s paintings had a similar effect, so the friendship was inevitable.
The Kiss was painted in 1907, and shown at Kunstschau exhibition the following year, resulting in state acquisition, regarded as Klimt’s triumph and triumph of modern style.
Johannes Irschik, director of Austrian KulturForum and Dejan Ubović director of Grad Cultural Center will open the exhibition and address the audience regarding this important anniversary, followed by a cocktail and exclusive launch of a limited edition Frikom Grandissimo ice-cream, inspired by Klimt. Every remarkable work of art provides a unique experience. Aiming for that same experience, and inspired by the unique artistic expression of Gustav Klimt, Frikom created a limited edition Grandissimo ice-cream, with a rich flavor and intricate details.
… Grandissimo will provide special moments of taste and inspiration.