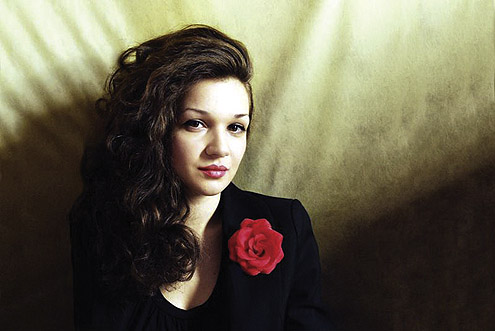 The “Killing the Blues” series, named after Roulanda Selia, is Katarina’s new project, whose repertoire is composed of the poems of authors that influenced her style of writing, as well as the cantautor style in general: Tom Wats, Bob Dylan, Johnny Mitchell and many others. Besides Catherine, trio is made by Ana Protulipac (bass guitar, voice) and Slaven Ljujić (drums).

With the intention of presenting to the audience cantautor music that escapes the genre, Katarina will, in new arrangements of the piano trio, perform songs of musicians who entered the rock and roll history, as well as those who are now setting new criteria for what the blues is, what American, and what is “singer-songwriter” music.

Katarina Pejak is a canonical, pianist and singer who currently lives and works in Nashville (Tennessee, USA). Born in Belgrade, she finished elementary and secondary music school “Mokranjac”, and then enrolled in the Berkley College of Music in Boston (State of Massachusetts, USA). She graduated at the “songwriting” section of this Academy in 2014, where she was awarded the Songwriting Achievement Award.

Katarina has three albums, two studio and one live mini-album: Perfume & Luck (2010), First Hand Stories (2012) and Old, New, Borrowed and Blues (2016), published by Blues Time Records from Belgrade. Her fourth album, filmed in Nashville in 2017, is currently under preparation for publication.

Ana Protulipac was born in Belgrade, where she graduated from the secondary music school “Stankovic”, theoretical section and jazz singing. She began to play music playing a classical guitar, and later she chose bass guitar as her main instrument. He is currently a member of the Irie FM band, as well as the Beyonce tribute band.

Slaven Ljujić was born in Nikšić, where he graduated from a lower music school, a classical guitar class. He continued his musical education at Vasa Pavić Music School in Podgorica, playing drums in numerous jazz projects, after which he enrolled in the Berkeley Music Academy, a drum section. He collaborated with numerous local and world artists such as Vinx, Larry Watson, Katarina Pejak and many others. In the past two years, he has been stationed in Nashville (Tennessee, USA) and is a regular member of the band Katarina Pejak.