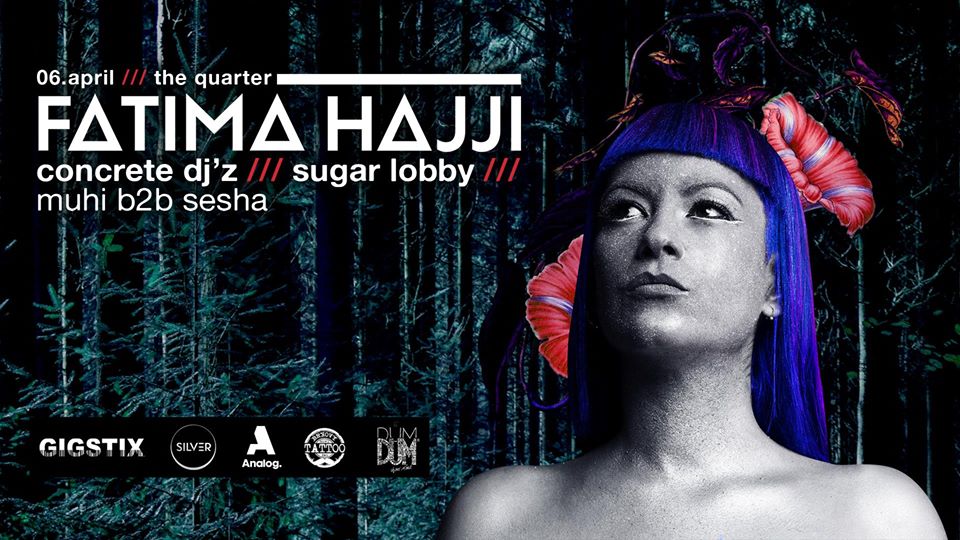 Spanish techno diva Fatima Hajji will be the first to present to the Novi Sad audience why she is one of the most popular representatives of the sound of electronic sound. With its incredible skill and unique music selection, it always guarantees a good atmosphere. In addition to DJ-ing and production, the production company Silver M. runs.

It is always pleased to be a guest at major world festivals such as Awakenings, Tomorrowland, Decibel, Free Your Mind, Liberty White, Nature One, Toxicator, and we can not ignore numerous performances in legendary clubs such as Tresor, Florida 135, Fabrik, Razzmatazz, Opera …

Her youthful spontaneity, explosive show and inexhaustible energy promise to break the boundaries and unforgettable experience.

Concrete Djz (Luka, Mita, Bojan and Matsura) began to be interested in electronic music back in 1997, which was also the year of the formation of Techno scene in Belgrade. Love for music made them very quickly, and they themselves started to deal with it. Since the founding of the 2003 Concrete, this organization is responsible for organizing a number of parties in Serbia. During this period, they performed throughout Serbia as well as in England, Wales, Macedonia, Brazil, Italy, Bosnia, Bulgaria, Montenegro and Croatia. Their style is Techno, varying from dark bits to pumping rhythms through which various elements and melodies are intermingled by combining their sound in a powerful and intelligent mix. As producers, their first release comes out in 2006 on the label Betamax Recordings. Shortly thereafter, over 20 vinyl editions are followed on well-known labels. Today they are also known as organizers Edit: Techno events, owners of Publishing house Armatura as well as the host Beton radio show.

Sugar Lobby is a DJ from Belgrade, as the producer has released her band for Organism, Induxtriall Records, RCR Black Limited. Sugar Lobby performed in Switzerland, Germany, the Netherlands, Poland and other countries of Southeast Europe and actively performs in the region. In 2017 she opens the legendary Dance Arena and performs at the Love Fest Fire Stage which she considers to be the pinnacle of her previous career. She has now shared the decks with artists such as Truss, Ellen Allien, Karenn, Rebekah, Jeff Mills, Jay Clarke, Marcus Worgull and many others. are hypnotic, dynamic, inspired by sound from publishing houses such as Polegroup, Token, Gynoid Audio.