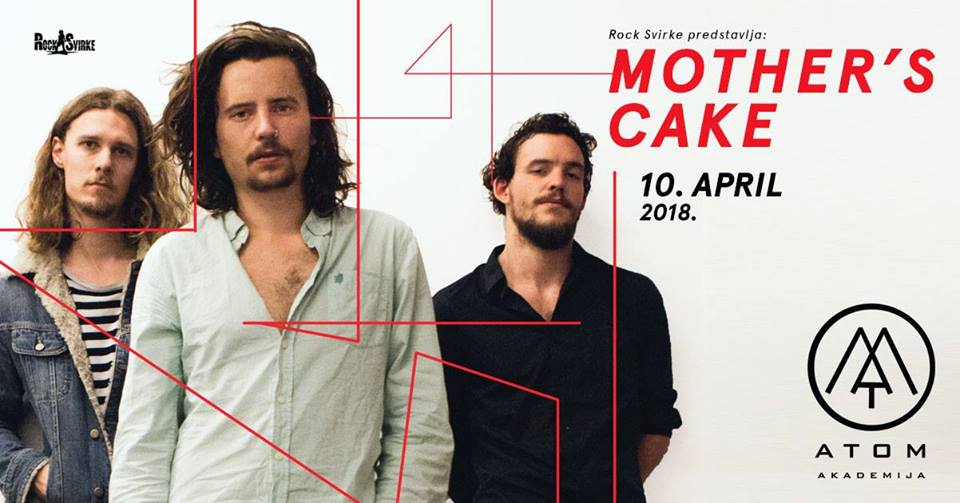 The rave and energetic trio of Mother’s Cake, which focused on themselves in concerts in front of the gigantic musical scene AC / DC, Iggy Pop, Deftones, Wolfmother, Anathema, Pentagram and Omar Rodriguez Lopez Group will perform on April 10, 2018 at the Atom Academy (Cara Dušana 13), organized by the concert agency RockSvirke.com starting at 9 pm

Tickets can be purchased at a promotional price of 500 dinars (limited ticket containers until they are sold or until March 12th) at Eventim Serbia, GIGS TIX, DD Tickets, cafe Zbornica (Skender Begova 53b), FELIX Shop , TC Sremska, (2nd floor, opening hours: 12 – 20h), as well as at the Atom Academy. When selling promotional tickets, the regular pre-sale price will be 600 dinars per day, and 700 dinars should be allocated per day for the ticket.

Mother’s Cake is an Austrian psych / prog band founded in 2008 in a small town in the Tyrolean Alps. Their musical expression was largely influenced by performers such as Mars Volta, Red Hot Chili Pepper, Led Zeppelin and Bootsy Collins.

In 2010 they won the Local Heros competition of demo bands in Austria, which gave them the opportunity to perform at the final competition in Hungary where many European bands with Mother’s Cake won the second place.

The debut album “Creation’s Finest” was released in 2012, and a year later they received the “Best Newcomer Award” in Austria. Three years later, a new record “Love The Filth” followed, and between these two studio releases, 2014, they released a live album “Off The Beaten Track”. Comparing them with bands such as Mars Volta, Jane’s Addiction and Led Zeppelin, these charters have laid the foundation for what is their best career release “No Rhyme No Reason”.

The most recent release of the band “No Rhyme No Reason” was released at the end of January last year. It is their third album, which was filmed in Beat4Feet and Tiny Can studios in Vienna, and besides members of the production team, David Furrer was in charge. The songs on the panel, such as the first single “The Killer”, “The Sun” and the original “No Rhyme Or Reason” instantly create an effect with an explosive combination of psychedelic, indie and blues, while some other tracks like “Street Man,” “Enemy “And” H8 “hit the center by mixing pshilodelical, progressive and space rock in a striking sound palette.

Mother’s Cake was also established as a phenomenal concert attraction. Their solo tour of Austria, Switzerland and Germany, as well as concerts that featured themselves as pre-gigs to bands such as AC / DC, Iggy Pop, Deftones, Wolfmother, Anathema, Pentagram and Omar Rodriguez Lopez Group, many convinced them in raw and the enormous energy the trio possesses, which they managed to transmit to the audience at a single collective level.