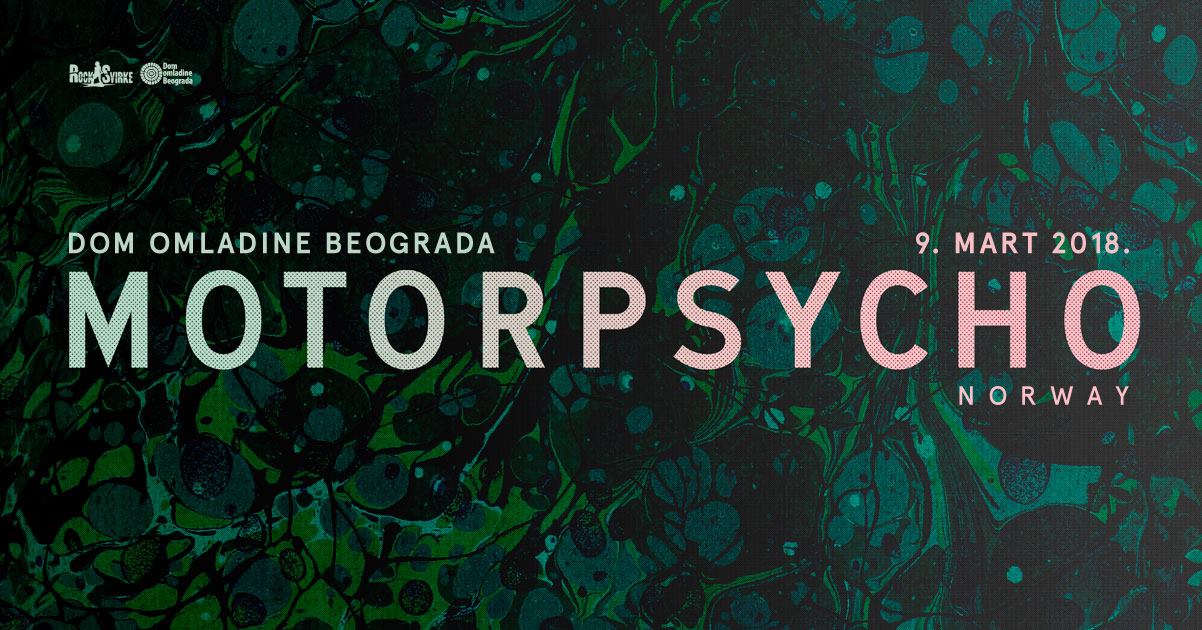 The Album of the Year of the Motorpsycho Group (NOR) – “The Tower” announced by BBC Radio 6 does not stop collecting positive reviews from music critics, media and fans. at the Dom omladine Beograd, organized by RockSvirke.com concert agency starting at 9 pm.

Tickets can be purchased at a promotional price of 1500 dinars (limited ticket containers until or until February 28) at Eventim Serbia, GIGS TIX, DD Tickets and FELIX Shop, TC Sremska (2nd floor, working hours: 12 – 20h). When selling promotional tickets, the regular pre-sale price until the day of the concert will be 1800 dinars, and it is necessary to allocate 2100 dinars on the day itself for the entrance fee.

The story of the Motorpsycho band began in 1989 when two school students, Hans Magnus ‘Snah’ Ryan and Bent Sæther, met again at Trondheim, where Bent studied and worked as a DJ at a university radio station. In addition, he played with Kjell Runar ‘Killerkjell’ Jensen in a group that was a necessary guitarist, and they recruited Ryan and the rest of the story.

The band’s name was chosen after the film was featured by Russ Meyer, and the first album, Lobotomizer, released in September 1991 for the independent indie label Voices of Wonder in Oslo. Next month, Håkon Gebhardt comes to the place of the drummer, and by the end of the year they start with their first gigs abroad. After the mini album “Soothe” and several singles, the band joined the fourth member of Helge ‘Deathprod’ Sten, which greatly contributes to the new, experimental sound of the band, which until then was quite in the classic matrix of the post-hardcore guitar. With his avant-garde approach, he set new standards in the band, and under these influences, a progressive, double-ended “Demon Box” album was released in 1993, which brought them nominations for Spellemanprisen and Norwegian Gremi, as well as an enormous base of fans across Europe. Deathprod, as a member of the band, took part in the triple release of Timothy’s Monster, the logical sequel to the experimental music universe captured on the previous record, after which it retreats and remains only as a producer.

The 1990s were a very productive period for Motorpsycho, since they published new material almost every year, and by the end of the 20th century they won the aforementioned Norwegian Gremi, three times for the album of the year in rock and hard rock categories (“Blissard” , 1996, “Angels and Daemons at Play”, 1997, and “Let Them Eat Cake”, 2000). With the album “Let Them Eat Cake”, the band moved away from hard rock and embraced the elements of jazz, pop, wired and windbreaking arrangements, and this principle will be retained on the next flags of “Phanerothyme” (2001) and “It’s a Love Cult” ( 2002). After a four-year disco break, “Black Hole / Blank Canvas” was released, which were completely played and singed by Bent and Shah, since in the meantime Gebhart left the group.

The band then tested various projects and changed the members, while Kenneth Kapstad did not arrive at the drum site, thus starting a new stage in the life of the band. The album “Little Lucid Moments” from 2008 represents the return of the high-octane date from the beginning of the career, and also marks the beginning of cooperation with the Norwegian avant-garde / jazz run RuneGrammofon. In order to celebrate the 20th anniversary of existence, Motorpsycho 2009 is publishing the “Child of the Future” video released in Chicago with Steve Albini.

In this day, the trio took part in many interesting projects, and last year they published the current studio edition “The Tower”. On this album, instead of Kapstad, who left the band, the role of the drummer is performed by Tomas Järmyr. Though they always tried to expand their musical aspects and explore new ways to express themselves, this is an adventurous album even for Motorpsycho standards. In music terms this is the hardest album that the band recorded after a long time, and the songs are in the range from short and sweet to long and heavy – in some parts flirting with even a stoner hand. Compared to the “Here Be Monsters” predecessor, “The Tower” is a more explosive release, the sound is dirtier, and the riffs are tougher, while the previous album was more introvert, the new record reflects the time it was created and more concerned with social rather than personal problems . The album was recorded in studios in Los Angeles and Joshua Three with additional recording in Trondheim. “The Tower” is a piece of evidence by which the band wants everyone to make it known that it is alive and to confirm that they are not yet old iron.