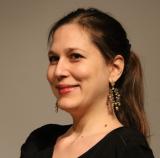 WEDNESDAY, DECEMBER 6, 2017 At 19:00
DOB // AMERICAN
The discussion is attended by: Nina Jargekov; Katarina Trajković, translator of the novel and editor-in-chief of the Arhipelag Gojko Božović
The entrance is free, the choice is simple: you can not make a mistake!

The French Institute in Serbia, the Archipelago and the Youth Center of Belgrade, organize a meeting and a conversation with the famous French writer Nino Jargekov, author of the novel Dual Citizenship.

Literary evening Nina Jarget’s part is a tour of this author in Serbia, during which she will visit Novi Sad and Kragujevac in the first week of December, visit several cultural institutions, and have more meetings with writers and readers in Serbia. Nina Jargekov is coming to Serbia at the invitation of the French Institute in Serbia and the Arhipelag Publishing House.

Serbian edition of the novel Dual citizenship in the Archipelago is the first edition of this novel by Nina Jaragkova outside the French language.

For this novel, published at the end of last year in France, Nina Jargekov received the “Flor” Award.

Dual citizenship is a novel about a woman who suffers from amnesia and has been rushed to the airport, with two passports, two cultures, two languages. “You’re flying at the airport. You do not know who you are or where you are going. You have two passports in your bag. You’re wearing a great crown, and you feel like a stolen car. How to make life from this amnesia? Repeat it? Even though this was actually two lives? “So the heroine’s novel is asked at one exceptional moment in her life that she shares with many emigrants, emigrants and young people in Europe whose identity and citizenship is crossed.

As the title itself suggests, this is the key theme of the new novel by Nina Jargekov: how to deal with two cultures, with two languages, with two sensibilities, how, in fact, to lead a double life? Or, on the other hand, how to support the country we live in, when it seems to be preparing to adopt the Law on the Prohibition of Dual Citizenship?

Born in 1980, Nina Jargekov is a French writer of Hungarian descent. He writes novels, engages in translation and sociology. She received her doctorate in the field of sociology of law. He teaches at the university. It also provides training for social workers working with families in difficulty. He is also a French-Hungarian and Hungarian-French interpreter from the court administration. He received the “Mission Stendhal” (2012), scholarships from the French National Book Center, and the “Flor” Prize for the novel Dual Citizenship (2016). She has published novels: Kill Katrin (2009), You Will Be My Witnesses (2011) and Dual Citizenship (2016). Nina Jargekov lives in Paris.