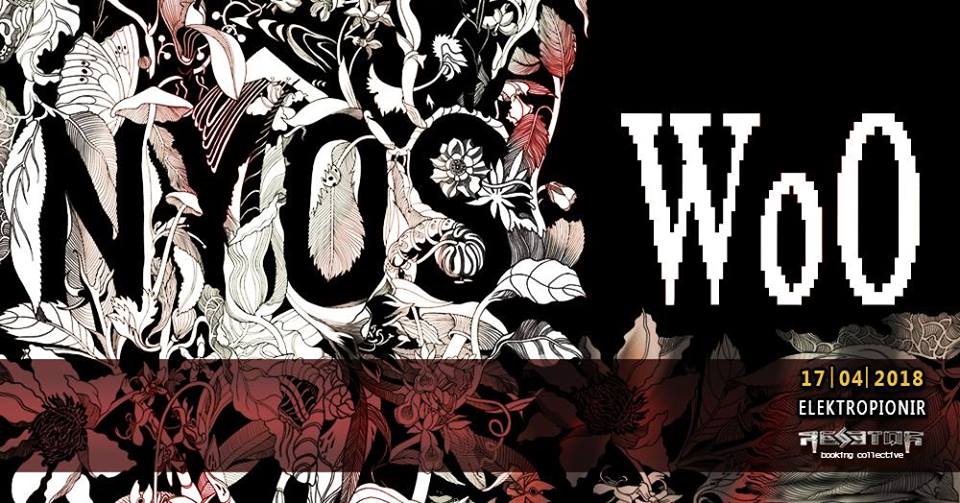 NYOS are a noisy, loop-driven, instrumental duo based in Jyvaskyla, Finland.
The band formed in 2014 when UK-born Tom Brooke and drummer Tuomas Kainulainen met after Tom moved to Finland. Bonded by mutual love of noisy bands, coffee and playing shows, they wrote their first record Vltava, and 26 minutes one-track piece, over the winter of 2014 and have been touring continuously since mid 2015, taking their (literal) wall of noise out to more than 150 gigs in over 20 countries! NYOS self-published 2014’s Vltava, and 2016’s follow up album Nature, both of which were recorded at Tonehaven Studio, and released on CD, LP and Cassette. Their third album, Navigation was released on September 29th 2017 as a collaborative release with Karlsruhe based Meta Matter Records.

Navigation, which was again recorded and mixed by Tom, was mastered by world-renowned Mandy Parnell (Bjork, Aphex Twin, Sigur Ros), and while both previous records Nature and Vltava were written and recorded as single flowing pieces, Navigation captures the band moving towards a more dramatic, varied and dynamic sound.

WoO (Vukasin Djelic) is a guitar player from Belgrade, a member of Dol and Halftones.
WoO guitar is equally treated as an instrument and as a signal receiver of various devices, both harmonious and percussive instrument. With great experience in improvisation, as well as with the experience of playing in rock bands, WoO combines these apparently different worlds into a new, sound-rich and unpredictable world of guitars, percussion, keyboards and semplers.
Under the name WoO, he has published a number of albums for different labels, as well as for his own DIY label Herbarium Records. He has performed at festivals across the EU such as Todays Art, Unsound, Fano Free Folk, Elevate, Norberg, Dni Muzki Nowej, Sonica and others. as well as in America and Mexico MUTEK, Communikey …
She works with Polish composer and violinist Olga Wojciechowski, singer Suzana Sumrah, sound art artist Svetlana Maras, guitarist Ivan Ckonjevic, saxophonist Jamal Al Kiswani, audio visual artist Extraordinary Bob and other artists.

Pre-sale of tickets at a price of 400 dinars starts in a couple of days in Zaokret (over Elektropionir, working hours: 09:00 am), and on the day of the concert will be at the entrance, 600 …