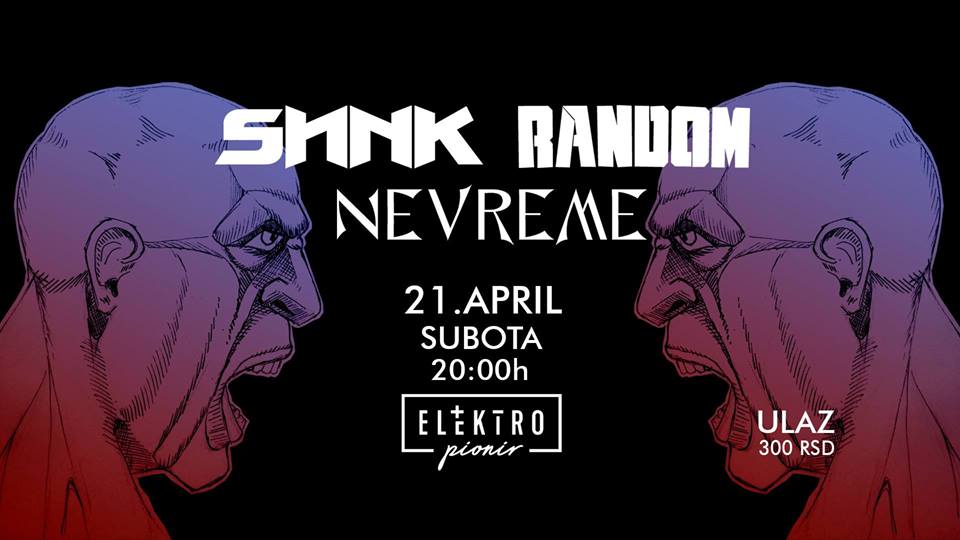 After a year Sink – SINK and Random (Serbia) again together in front of the Belgrade audience, this time with the support of the volatile group Nevreme! All three bands, after a series of novelties that they shared with the audience in the previous period, will come out on the Elektropionir stage and present new songs and new energy to the audience. The three-hour concert tour through various genres is scheduled for Saturday April 21, in one of the most influential Belgrade concert venues.

After a number of live concerts across the country, Sink – SINK will play the most popular songs from Belgrade with the two albums “All I’m not” released in 2014 and “Before the Pillar of Shame …” published under the label Nocturne Media last year. All present will have the opportunity to hear some of the latest unpublished songs, which will be found at the end of the third edition of the band. Six years of joint work, which marked the last year’s performances at the Exit Festival, the Dev9t Fest, the Kuršumlijska gitarijada as well as many other concerts, then many spots and many new songs, Sink will celebrate this Belgrade concert together with its audience.

Random (Serbia), after active last year and the success achieved at the Bunt Rok Festival and the Kuršumlijska guitar, announces the long-awaited annual concert in Belgrade. The band with the new single and spot for the song By Myself announces a bit harder and even mature sound compared to the previous two EPs “Smile & Wave” and “Rewind”. The attendees will have the opportunity to get acquainted with some of the unpublished novelties planned to be on the first album released in the spring of 2019.

From the very beginning, Nevreme’s work focused on author’s creativity and in 2012 she published her first studio album “Sandcastle” and took concerts at festivals all over Serbia. After a couple of years of pause and solving life situations, all for the sake of Nevreme, which held the members of this band together, they also created their second album, “Koferi”, which is in the process of recording, and as a small introduction to the new story, presented the song ” Black Abacus “. The nerves currently live and create in Belgrade, and new concerts will begin just on April 21, when it officially returns to the scene to enrich it.

During the concert, promotion of the first collection of poetry by Dragan Miočinović, guitarist and songwriter of the group Sink, which will be named “The last cry of everything I am not …” will be held, and all interested will be able to buy their copy of the collection.

The Elektropionir Door opens at 20h, the exact timetable will be respected, so the bands call the audience to come in time. The price of the ticket is 300 dinars, and tickets can be bought at the entrance to the club on the day of the concert, as well as in the rooms of the Šikarica coffee shop and in Elektropionir itself, about ten days before the concert.