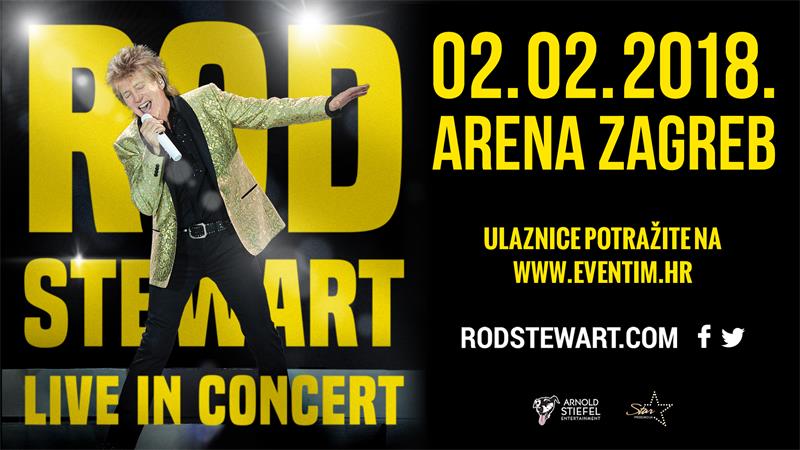 One of the world’s greatest music names, Sir Rod Stewart, a voice behind hits such as “Sailing,” “The First Cut Is The Deepest,” “Rhythm Of My Heart,” and “Maggie May,” arrives to Zagreb on the other day of February.

Sir Rod Stewart has been dubbed the legendary Rock and Roll Hall of Fame twice and is one of the best-selling artists of all time who has sold more than 200 million albums worldwide over five decades of career. His many successes include six consecutive albums featured on top of the UK charts, including 62 hit singles in the UK and six # 1. In the US, he launched 16 singles that entered the top ten, and four of them won the Billboard Hot 100 chart first. In 2016, he received the title of a knight for his merits in music and humanitarian work.

This August, in collaboration with the multi-platinum group DNCE, has captured the interesting work of one of her most successful dance hits of all time “Yes Ya Think I’m Sexy.” Their debut performance was the main hit of this year’s MTV VMA Awards award. The award video can be viewed at the link: http://youtu.be/lDT_EZHiBaA and single is available at https://itunes.apple.com/us/album/da-ya-think-im-sexy-feat-dnce -single / id1272951328.

The star of the Zagreb Concert organizes an unforgettable experience for all fans of the music legends: “It is a great honor to represent a world star whose name has been the guarantee of top-class music and production and, above all, great entertainment for decades. The first Zagreb performance by Sir Rod Stewart is a great excitement for us, but also a challenge, so we are eagerly awaiting next February, “said Director of Star Productions, Alen Ključ.

Ticket sales has already begun and information can be found at www.eventim.hr. Members of fan club Roda Stewarta will have access to exclusive content, photos, video material and tickets to be pre-sold, and those who are only planning to access this club can find the information at https://fanclub.rodstewart.com/signup/.

Stewart’s great sense of humor and unparalleled style are the ultimate in music performance, so do not miss seeing this super-star live!
Tickets for the performance of the singing legend on the 2nd of February in Zagreb Arena can be obtained via the site www.eventim.hr

Stewart Rod invites you to an unforgettable musical spectacle in Arena Zagreb, February 2, 2018. Do not miss out on how this musical legend sounds live! Tickets are on www.eventim.com

2. Do not miss the spectacle that must be experienced, Rod Stewart, the first time in Croatia 2.2.2018. Tickets are available at www.eventim.hr