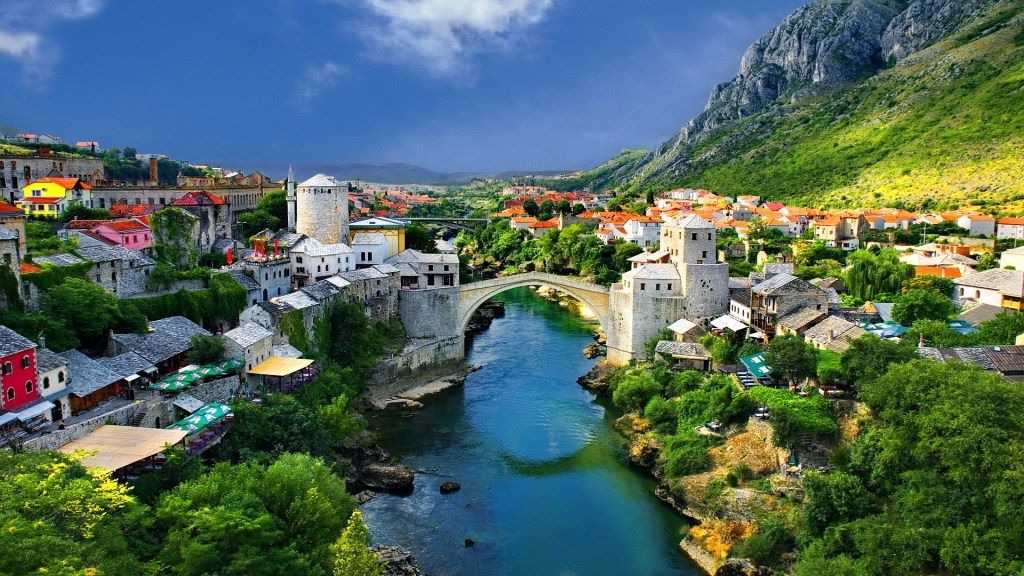 http://wintravel.rs/
The price of the arrangement —- 139 €
Day 1
Belgrade – Višegrad – Trebinje
Meeting of the group at 5.30 am at the park in Novi Beograd (block 42). Departure from Belgrade at 6h. Drive to Višegrad, through Čačka, Mokra Gora, Uzice.
Coming to Visegrad around noon.
Cultural historical walk through the city. A tour of Andrićgrad that originated as the idea of ​​Emir Kusturica about a stone medieval town inspired by the works and figures of the nobleman Ivo Andrić.
Visit to the famous bridge, which represents the architectural wonder of the time.
Continue to Trebinje via Sutjeska National Park. Arrival in Trebinje around 19h. Accommodation in the hotel. Overnight.
Day 2
Trebinje – New Year
The breakfast. After breakfast tour Trebinje. The Old Town (Kastel) is a visit to craft workshops, Osman Pasha’s and the 18th-century Careva mosque. In the afternoon, departure to an optional half-day excursion (5 €). A visit to Hercegovacka Gračanica from where a fairy-tale view of the whole city and the Arslanagić bridge, which was built in 1574 by Mehmed paša Sokolović. Continue to the Tvrdoš Monastery. Tour of the Monastery and wine cellars. Visit to the birthplace of St. Vasily Ostroski. After going back to the hotel.
In the evening, THE NEW YEAR’S EVE with a festive New Year’s Eve dinner with live music at the Leotar Hotel. Overnight.
Day 3
Trebinje – Dubrovnik – Trebinje
The breakfast. In the early afternoon departure to a half-day optional excursion to Dubrovnik (10 €), City Tour: Franciscan Monastery with the oldest pharmacy in Europe, Dominican Monastery with Titsian’s image of Mary Magdalene, Sponza Palace – former Customs House, Rector’s Palace, Orlando Pillar, Orthodox Church, streets Stradun and Prijeko, city walls with towers, among which the most beautiful Minchet. Leisure.
Return to the hotel in Trebinje. Overnight.
Day 4
Trebinje – Mostar – Sarajevo – Belgrade
The breakfast. Leaving the hotel at 8h. Road to Mostar for about 1 h. A cultural historical walk through the city of Neretva. The Old Town with its narrow cobblestone streets – a masterpiece of Islamic architecture: Old Bridge, Kriva Cuprija, Begova Mosque are the most famous monuments of the city. After the tour, free time.
In the early afternoon, we continue the road to Sarajevo.
Sightseeing. Eternal Fire, Saraj, Baščaršija, Vještica, Inat house, Latin Cuprija, Sightseeing Bezistana – a covered market where once used to sell expensive silk from Burse. Tour of the Gazi Husref Bey Mosque from the 16th century Departure to Belgrade at 18.30h. Driving through Loznica and Sabac. Expected arrival in Belgrade at midnight. End of arrangement.
SUPPLEMENTS FOR TRAVEL FROM NIS (MINIMUM 15 PASSENGERS) ——- 2.000,00 din