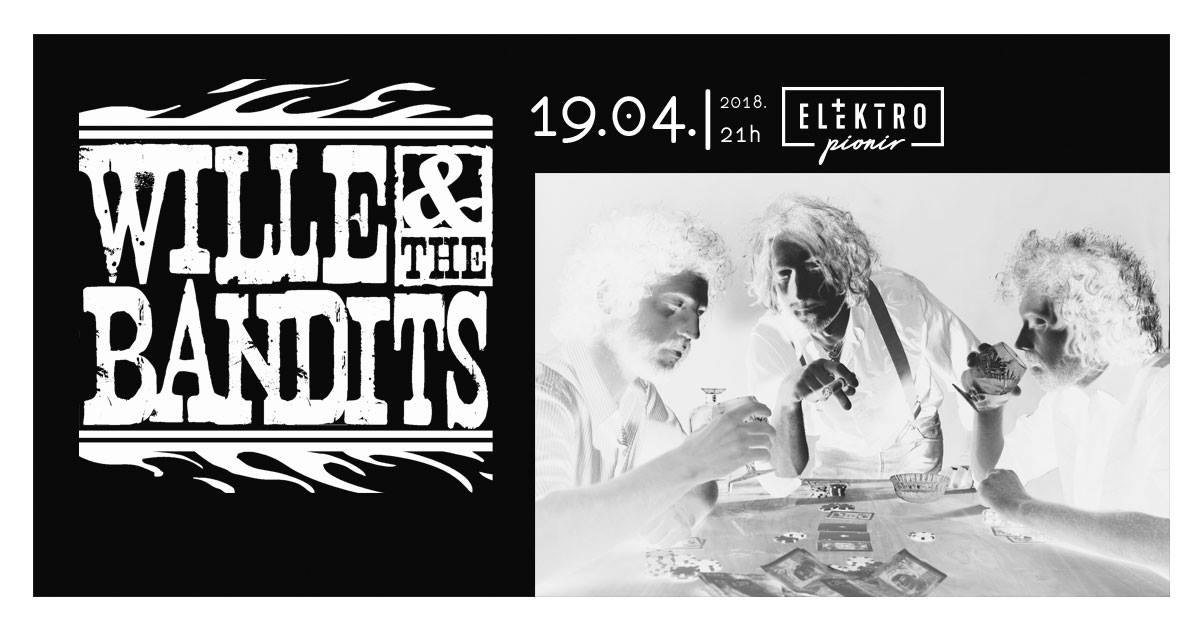 One of the biggest stars of the new blues-rock scene, the band Wille & the Bandits as part of a European tour to promote the new studio album “Steal” (February 2017) will hold a concert at Elektropionir club on Thursday, April 19, starting at 9 pm .

Tickets can be purchased at a promotional price of 400 dinars (limited contingent!) At the points of sale of Eventim Serbia, GIGS TIX, DD Tickets, Zaokret, Šikarica and FELIX Shop, TC Sremska (2nd floor, working hours: 12 – 20h ). When the promotional tickets are sold out, the regular pre-sale price will be 500 dinars per day, and 600 dinars should be allocated per day for the ticket.

Wille & The Bandits is basically a classic three-band blues rock band, sounds similar to Cream and Jimmy Hendrix (Jimi Hendrix), which modeled the sound and musical boundaries in a unique and unexpected way.

This is a band that is classified as progressive or world music because of the use of bizarre instrumentation and the eclectic style of writing texts. So far, the band has been on tour with Deep Purple and John Balter Trio, and has also played at major festivals all over Europe. Wille & The Bandits is a band that equally leaves great impressions both to the audience of all ages and to the entire music scene, all thanks to energetic and heart-stirring performances.

Positive reviews were sent to their account, by BBC Radio 1 they were selected in the top 10 must see bands at the Glastonbury Festival 2014 and reached the second place on the British Blues list with their first single. Now they are on their tour of their third independent studio album. The fan base, the repertoire of sounds, styles and innovations of this band, grows upward.

Except for the media, the band is praised for their originality and a unique line between hands and blouses and by legendary legends like Ian Paice, Joe Bonamassa and Francis Rossi.

“Wille is a great slide guitarist. I love what these guys are doing! “- Joe Bonamassa

“I love the soul in their music.” – Bob Harris

“It’s rare to find a band that is as dynamic as Wille & The Bandits, which sounds so comfortable and at the same time impressive at both ends of the sound spectrum. In today’s, modern world of one-time music, it’s refreshing to hear a band that still appreciates the art of creating album and which uses new instruments and new ideas in writing texts in relation to tried and tested methods Ten seconds on Jutjub will not even scratch the surface of their sound and the message they carry Wille & The Bandits is a band that is being revealed, and the best way to do it is – live!

These guys are munching and singing like angels and it takes little to understand why they belong to the festival atmosphere. “- Glastonbury Festival

“This incredibly talented band is great in playing no one or two musical directions, but in several directions and at an extremely high level.” – Maverick Magazine

“If Cream spent more time on the Newquay beach, they might sound like they are.” – Blues Matters Magazine

“Will’s voice immediately seizes you with the first sang of notes. It’s a great instrument, and when you play this way, notice how much this band is really high. “- Maverick Magazine