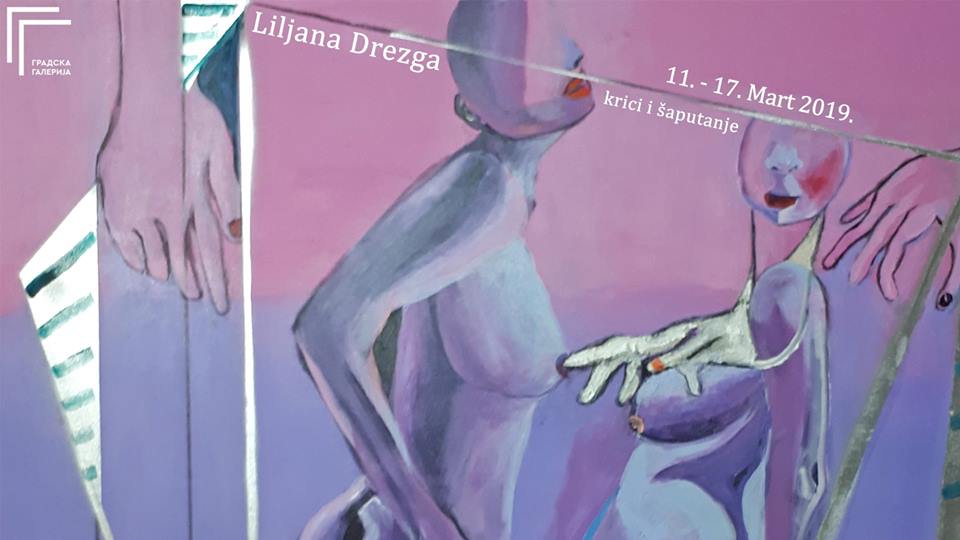 Cultural Center Grad presents a very special and extraordinary exhibition opening in Gallery Grad, on Monday, 11 March, starting from 8 pm. Artist Ljiljana Drezga will be presenting her latest painting series titled Cries and Whispers. This is extraordinary because Drezga is showing her work rarely in the past years, and it is special since she decided to present her latest series of paintings the Gallery Grad.

Ljiljana Drezga has entered the art scene in 1969, after studying in Chile and Argentina. In 1976 she has joined ULUS, The Serbian Artist Association. Cries and Whispers will be her 50th solo exhibition. From the very beginning, Drezga has participated in important group exhibitions in Yugoslavia, such as the Biennale of Young Artists in Rijeka in 1971, then the October Salon 1972 and 1975, and the exhibition Yugoslav Artists in New York in 1973. Her paintings are dispersed in numerous private collections in the country and abroad, due to the universal qualities of Drezga’s artistic handwriting. A lot of artworks remain in Spain, where she lived and worked in the early nineties and managed to establish herself onto the Madrid scene, showing solo three times in the galleries Orfila, Centro Cultural Gallileo and Mayte Commodore.
Djordje Kadijevic, art critic and director, has noted that Drezgina’s painting preoccupation had formed and remained around the human body. However, Drezga examines under the skin and into hidden mazes of the body, resulting in expressionist landscape of the human spirit. She has never moved away from figuration, but on the other hand, as an expressionist, she has always kept it on a symbolic level. The conflict of bodies as a leitmotif transgresses the symbolic power on the canvas, whether Drezga tries to evoke memories of Spain, or meditates about Pina Bausch. The new painting series brings new preoccupations, through a cold, saturated, but also warm and vibrant coloring that always evokes the Hispanic-American spirit of her childhood and educating. That spirit influences Drezga’s energetic and explosive painting instinct, making her very productive at the same time. Her work has been praised by many critics like Lazar Trifunović, Pavle Vasić, Zoran Markuš, Dragoslav Srejović. Therefore, the title Cries and Whispers is not just a random title, but a particular reference to the impression of the director Živko Nikolic, who has, after a third visit to the exhibition in Cvijeta Zuzoric in 1981, called Drezga over the phone to announce that her paintings were in fact images of Begman’s famous film Cries and Whispers.
Drezga’s expressive landscapes of the human spirit, will be opened to the public until Sunday 17 March. Right after Belgrade, Cries and Whispers travel to Berlin. However, the painting will be available for sale to all art lovers, and the gallery will be opened every day from 2 till 8 PM.