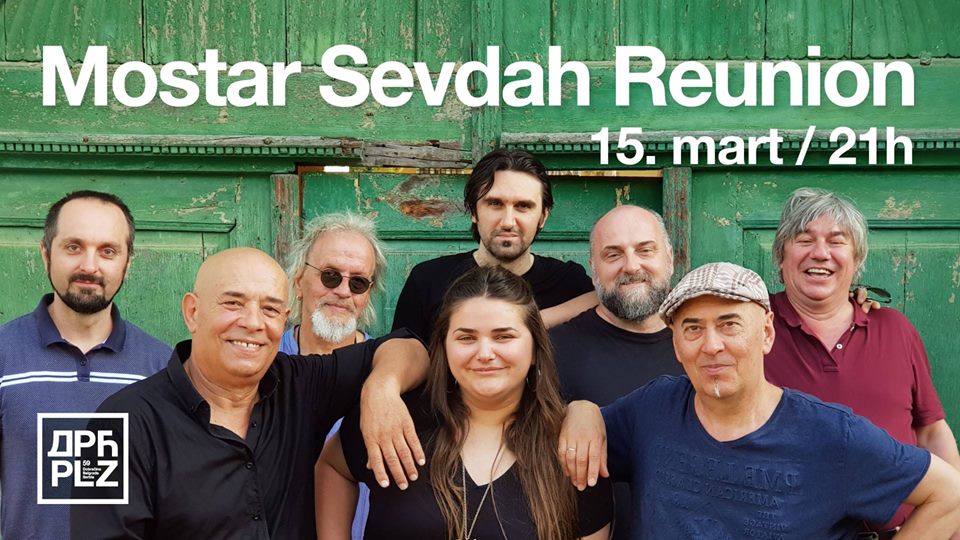 Dobračina 59b, Belgrade, Serbia
15.Mar.2019
21:00BeogradSrbija
Do you like this event? Click on a button to like it!
Mostar Sevdah Reunion is preparing a spectacle in Dorcol Platz!
Mostar Sevdah Reunion finally returns to Belgrade! Following the sale of the Sava Center, Kolarac and Mikser House, the Kings of Sevdah announced this year’s Belgrade concert for March 15 in Dorcol Platz and are coming prepared to justify their current success on the world’s top music charts.
Mostar Sevdah Reunion – the pioneers of the seventeenth century, or, simply speaking, the greatest Bosnian-Herzegovinian cultural ambassadors, with their unique style of performance, combining original sevdalinka with jazz, blouse, soul and ethno elements, delight the audience all over the world.
Their great success in the world is proven by the fact that Sretin is the latest album for the third consecutive month on the European top chart for World Music by the EBU (Eurovisian Boradcating Union). In January he was in ninth place. Also, the latest video of the band “Srdo moja” in the performance of young Antonija Batinic’s female vocalist in the band, was in January’s first position of the most famous World music internet platform ETHNO-CLOUD.
With the latest studio album “Mostar Sevdah Reunion presents Sreta – The Balkan Autumn” in the release of the Dutch Snail Records, the band presented the World Music scene one of the best kept secrets of Balkan music – Milutin Sretenovic Sreta, who had his TV debut in a famous show “Its never to late”. Sixth and the team were only once to see and hear him live when they appeared to them as a special guest on the occasion of the celebration of the 80th birthday of the King of Romany music, late Shaban Bajramovic, after which they started to cooperate with him. “I do not have the right or bad luck” which opens the album; its real identity. The shortest rating of this album by many means that Mostar sevdah reunion with Sreta recorded their most commercially available album without having released their original inspirations and goals.
Tickets for this event can be found in a limited number at a pre-sale price of 900 dinars at the points of sale of GIGS TIX, as well as at the Dorcol Platz box office. From March 1, the ticket is 1,100 dinars. The concert was announced at 21h.