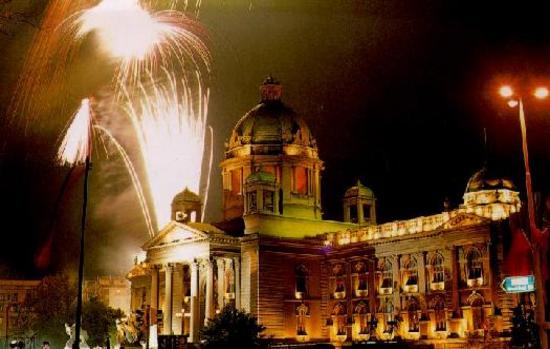 The program for the New Year’s Eve in Belgrade will last for three days, from December 30 to January 1. It is designed to have di-jacks on December 30th, the program is adapted to young people on December 31st, it will be the biggest stars to attract the most audiences, and a concert of classical music will be organized on January 1st. The manifestation under the slogan “Circle Belgrade” runs from December 1 to January 31, 2019.
For the New Year’s Eve, “Bajaga i instruktori” will perform in front of the National parliament, Haris Džinović, Saša Kovačević and Dejan Petrović , while on December 30th they will perform “Rudimental”, SARS and British band “Stereo MC s”
The performance will be on the 1st of January, when Aleksandar Sasa Sedlar will perform at the classical music concert from 2 pm. Among his guests will be the soloists of the Belgrade Opera, Aleksandar Eraković, Vunturišević, Leontina Vukomanović with the choirs of Čaroli and Ana Stanić. In the evening for the New Year’s rehearsal, Rasta, Gramofondzija, Senida and Disciples are expected to perform. Also, within the manifestation “Belgrade Winter”, the performances of “Neverending Baby”, Lena Kovačević and other performers are expected.
New Year’s celebration will be even better and more attractive than the previous years.
Since December, activities have started to celebrate the New Year’s Eve. There will be organized children’s performances, concerts, Christmas party at St. Sava Temple, on the Nikola Pasic Square will be a skating rink around the entire fountain, gaming zone and for the first time a toboggan run with six meters of height and two meters wide.
Traditionally, on January 1, the Open Heart Street in Svetogorsk and nine other locations will be organized, as well as many other activities.