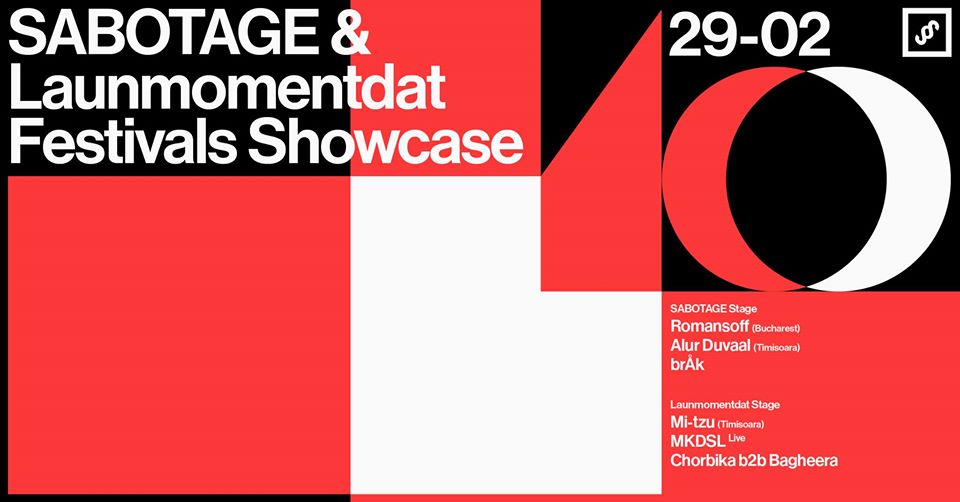 Bulevar Despota Stefana 115
29.Feb.2020
23:00BeogradSrbija
Sviđa ti se ovaj događaj?
Romania’s electronic music scene is flourishing with interesting labels, DJs and festivals which got international praise in the past decade. On this imaginary now-you-see-it-now-you-don’t date called February 29, we present you two Romanian festivals, SABOTAGE and Launmomentdat, both held in Timisoara.

SABOTAGE Festival
The first edition of the festival took place in a warehouse on May 25th, 2013 and was attended by more than 2,000 young people. The festival aims to promote local talents alongside internationally acclaimed artists. Some of the names that visited the festival are: Stallion’s Stud, Identified Patient, Tijana T, Delta Funktionen, Goldie, WhoMadeWho, etc.

Launmomentdat
Launmomentdat started out as small studio-parties that emerged during late 2013 in Timisoara. By 2016, it succeeds in hosting its first outdoor edition of “Launmomentdat in parc” festival, which brings together international and local DJs, producers and vinyl collectors to perform, share experiences and create connections that work outside the festival. It’s a three-day event where the entrance is free for everyone. Last year it counted over 12.000 attendees.
Launmomentdat in parc has showcased inernational acts from Sassy J, Raphael Top-Secret, Zaltan, Cosmo Vitelli, Djedjotronic, Chorbika, Interstellar Funk, Loefah, etc.

Tudor Gheorghe, also known by his stage moniker Romansoff, is a Bucharest based DJ, Raw Tool label founder, producer and vinyl collector with more than 10 years of experience on Romania’s capital underground club scene. Heavily influenced by the small local underground parties in the 2000’s, Romansoff was motivated to begin collecting vinyl which soon then after led to him starting DJing. Since then he has released on several labels such as Lobster Theremin’s sublabel Mork, Creme Organization, Cosmin TRG’s label, Sportiv and Solar Phenomena among others. In 2018, Tudor started working on a new project at Platforma Wolff.

Alur Duvaal, originally from Timisoara, sought to bring a little bit of novelty to the quiet local scene. Resident DJ for both Launmometdat and SABOTAGE, his musical approach aims to draw attention to the melancholic side of techno, a combination of dark and hypnotic rhythms, elegantly shaped to incite the collective dancefloor.

Mi-tzu has been in the game since 2012, and from 2014 he is an active member of Freenetik Kru. He shifts from genre to genre, around various venues and festivals. His DJ sets are full of groove, soul, and energy, taking the dance floor through different moods and styles.