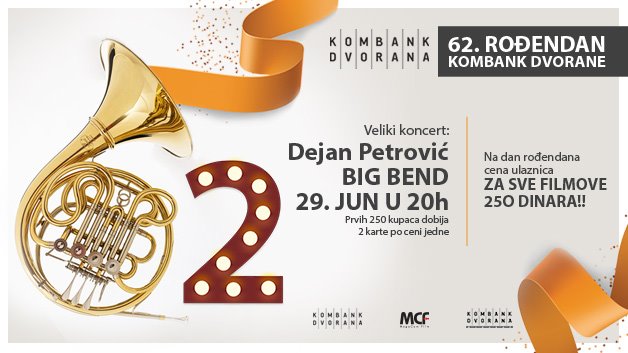 Trg Nikole Pašića, Belgrade, Serbia
29.Jun.2019
20:00BeogradSrbija
Do you like this event? Click on a button to like it!
KOMBANK HALL, FIRST HALL OF THE HOUSE OF SYNDIKATA PROMOTES 62TH BIRTHDAY 🎂🥂
THE GREAT CONCERT DEJAN PETROVIC BIG BENDA AND THE REDUCED PRICES FOR ALL FILMS!
Kombank Hall, the former Hall of the Trade Union Hall this month will mark 62 years since its establishment. The cult place that marked the birth of many generations will celebrate its anniversary on June 29 at 20h with the grand concert of the famous Dejan Petrovic Big Band.
As a sign of gratitude to its multiethnic audience Kombank Hall has prepared a special discount on the price of tickets for the jubilee concert.
Thus, the first 250 customers will receive a free ticket with one purchased ticket for the concert, or two at the price of one. At the same time, on June 29, the price of tickets for all 2D and 3D films from the cinema repertoire Kombank Dvorane will amount to 250 dinars, and visitors on the day of the jubilee also expect surprises.
Recall, the Hall of the Trade Union Hall, was opened on June 13, 1957, on the foundations of the building that was built from 1947 to 1955 according to the project of architect Branko Petricic. The fully reconstructed Kombank Hall was officially opened on April 27, 2018, after the reconstruction lasting ten months.

⭐️ About DEJAN PETROVIĆ BIG BENDU ⭐️
Dejan Petrović or as he was otherwise called “the ambassador of the Serbian trumpet” was born in 1985 in Uzice, in the village of Duboka, as the successor to the most famous Serbian trumpeter, Miće Petrović. In the musical production of this family, Dejan and his brother Darko are the fourth generation of trumpers.
Dejan is the youngest winner of the “Master’s Letter”, the multiple winner of all Prizes at the Parliament in Guca, among which is the First Trumpet of the World Award, from the same Parliament. He is known throughout the world for performing traditional Serbian music, which he often combines with totally opposite, modern elements.
VISIT THE COMBANK HALLS 🔜 https://bit.ly/2wza5ux