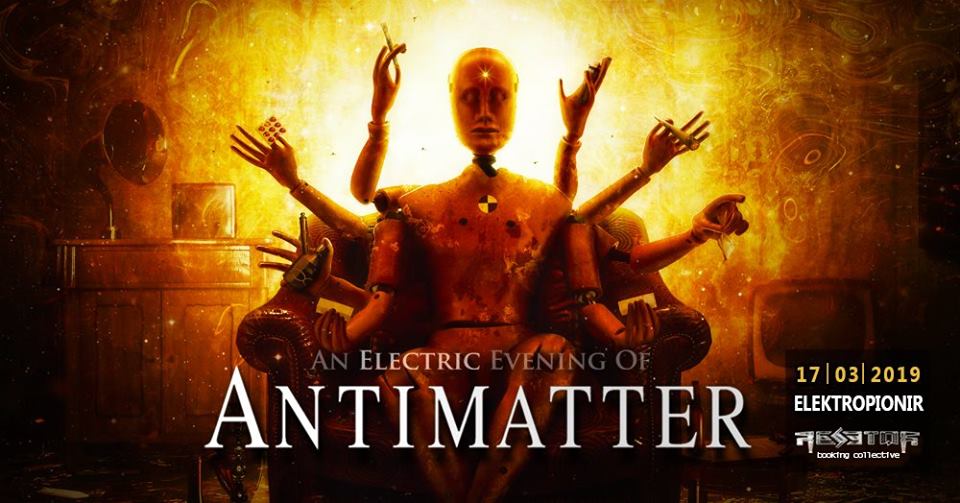 Cetinjska 15, Belgrade, Serbia
17.Mar.2019
20:00BeogradSrbija
Do you like this event? Click on a button to like it!
Antimatter again perform in Belgrade after a long time! After two unplugged appearances in the now legendary SKC Livingroom in 2007 and 2009, Mick Moss and the team in the capital come for the first time as an electric band. As part of the promotion of the seventh album of the band called Black Market Enlightenment, on November 9, 2018, Music In Stone released its performance in Elektropionir.

https://www.facebook.com/antimatteronline/
http://www.antimatteronline.com/
https://antimatteronline.bandcamp.com/
Mick for Black Market Enlightenment claims that the most creative Antimatter album so far and that in his career for the first time in his career he did not rely on tried principles in terms of processing unfinished songs from archives or playing conventional instruments. Critics who heard the album say that it sounds like “the gloomy Goliath” and that it represents the smallest and most complex Antimatter release so far.
The tickets are pre-sold as of December 10th. You can buy a limited amount of tickets at a promotional price of only 800 dinars in Zaokret (via Elektropionir, working hours: 09-00h).
For those who live VAN Belgrade: through antimatterkarte@gmail.com you can make a reservation of tickets at a price of 1000 dinars as much as it will cost in regular sales. The letter must state the name, surname, amount of tickets and mobile number. On the day of the concert exclusively at the entrance, after 1200 …