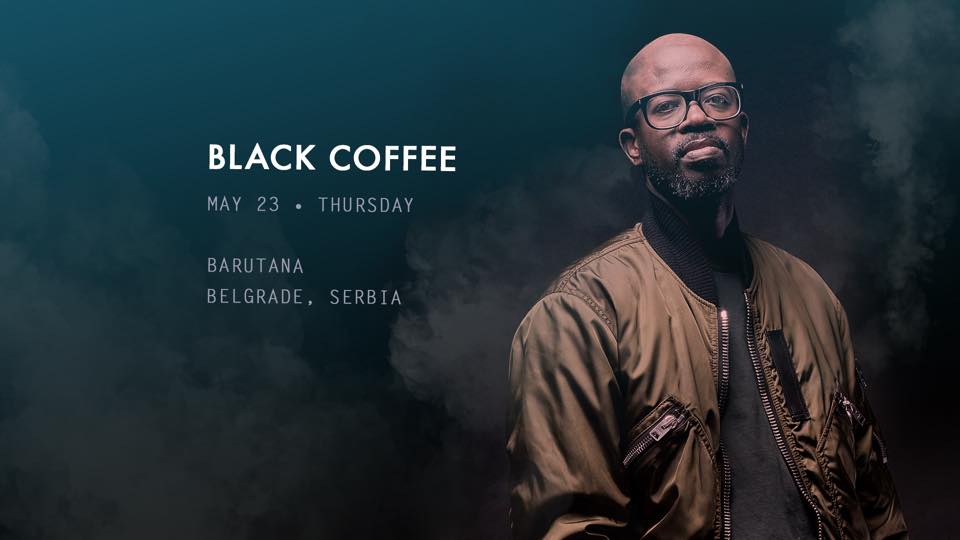 Barutana, Belgrade, Serbia
23.May.2019
23:00BeogradSrbija
Do you like this event? Click on a button to like it!
The King of House Sound and the world’s super-star Black Coffee, returns to Barutan on Thursday, May 23rd. ☕️ _________________________________________ Limited contingent tickets are on sale at promo price of 1290 dinars for the parter and 1790 dinars for the VIP platform, through the sales networks Ticketvision and GIGS TIX ._________________________________________ Creative genius and one of the absolute phenomena of the modern electronic scene, Black Coffee, has been engaged in music since ancient times 1995. year. His musical career began with university studies of jazz, after which he was following vocals for Madeleine Kunene. Shortly afterwards, he founded a urban soul trio called SHANA (Simply Hot and Naturally African) with two friends. In addition to the joint project, three of them simultaneously developed their individual careers, and in 2003 Black Coffee was chosen as one of two South African participants in the Red Bull Music Academy competition, which brought it to the map of the South African DJ scene. His first significant success was the track “Happiness” that came on the DJs At Work album.
He released his first album, Black Coffee in 2005, when he formed the Soulistic Music publishing house, which was a stepping stone for both him and other producers. In the last ten years, Soulistic Music has developed a world-wide network of exclusive music licenses, tournaments and agents that allowed Black Coffee and other producers to break into the international market and become regular guests of the world metropolis, from Sydney to New York, London to Luanda and Los Angeles to Athens.
Over the years, Black Coffee has won numerous awards. At the SAMA Awards, he won the awards: Album of the Year, Best Dance Album and Best Engineered Album, for “Pieces of Me”. He is also the winner of the prestigious International Achievement Award. He also became the first South African to win the BET award in the Best International Act: Africa category.
He is one of the most sought-after performers, and his tour consists of over 250 performances annually, the most important being the return to Coachella, Tomorrowland, a resident at the Wynn Club in Las Vegas, his evening at Ibiza, as well as performances at festivals and clubs on four continent. He is particularly proud to be the organizer and host of the Black Coffee Block Party, where 30,000 people played in the streets of Johannesburg and Durban.
Black Coffe combines electronic music with African heritage, and its sets become almost spiritual. One of the few who sincerely understands the precise function of the music disc of the jockey, he simply does not mix the songs, he reinterprets, adjusts and adjusts them to music sets in his very specific way. In his most often long mixes, remixes of timeless songs such as “Purple Rain”, “Is not No Sunshine When She’s Gone” are inevitably heard, which in a way they inhale a whole new life and implements them into the world of electronic music. He describes his musical style as a deep house stretching with refined percussion with always present melodies and vocals. He is known for hits such as “Superman”, “Turn Me On” and “Crazy”.
In Barutano, the god of the finest house sound, this May, brings energy to the world’s leading clubs from Ibiza, Miami, Las Vegas or New York.