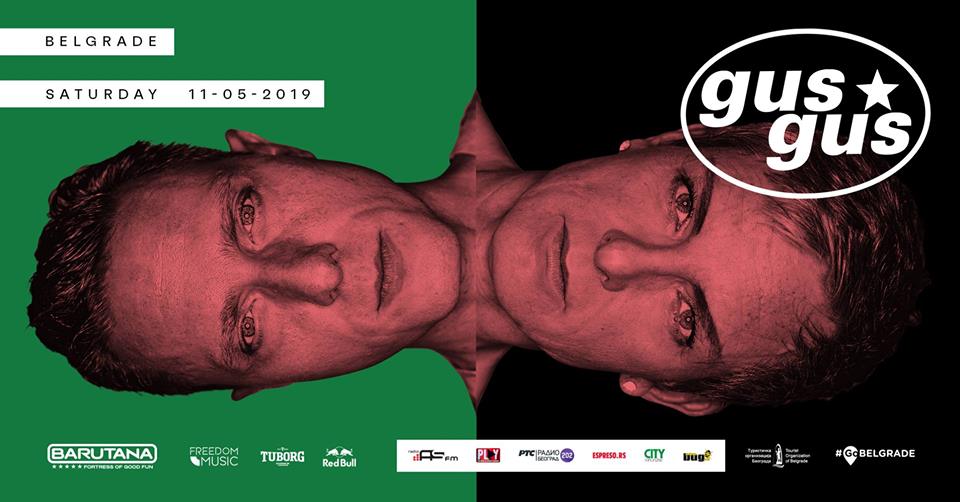 Barutana, Belgrade, Serbia
11.May.2019
23:00BeogradSrbija
Do you like this event? Click on a button to like it!
One of the most popular electronic compositions, Icelandic avant-garde attraction GusGus, will perform on Saturday May 11 in Barutana.
A limited number of tickets at a promo price of 1190 dinars for the parter and 1790 dinars for the VIP are sold through Ticketvision and GIGS TIX sales networks.
– – – – – – – – – – – – – – – – – – – – – – – – – – – – – – – – – – – – – – – – – – – – – – GusGus are the favorites of every audience which loves good parties and dance music, Nordic electro sound, as well as magical and exciting live performances with an artistic seal. At the very beginning, their music was under the strong influence of trip hop, which in time replaced the club haus sound with euphoric pop sensibility of enchanting emotions and energy.
GusGus was founded in 1995 in Reykjavik as a collective of musicians, producers, filmmakers and performers, while today they are a duo composed by singer Daníel Ágúst Haraldsson and Birgir Þórarinsson. They are known for eclectic sound and unconventional fusion of electro, techno, trip hop and haus, successfully combined with pop and other music genres. They collaborated with some of the best-known electro and pop-hits, including Björk, Roisin Murphy, Depeche Mode, Sigur Ros and Ian Brown.
In nearly three decades of career, GusGus released ten studio albums. They celebrated their second album, “Polydistortion” (1997), one of the best discography gems of the nineties, followed by performances around the world. The world’s top charts came a few years later with the single “David”, from the fourth studio album entitled “Attention” (2002). Their most commercially successful release is “Arabian Horse” (2011) featuring hits “Over” and “Arabian Horse”. Three years later, “Mexico” was released, which won the dance audience “Obnoxiously Sexual”. The last album “Lies are more flexible” was released last year, and is a fusion of ambient, dauntempo, progressive house and neo-electronics with a touch of the 80’s and 80’s retro synthesis that listens to the emotional journey through eight new tracks led by the first single ” Featherlight “.
Although the development of electronic music has made a lot of progress, GusGus does not adapt to trends, and continues to use analogue equipment to create real electronic sound.