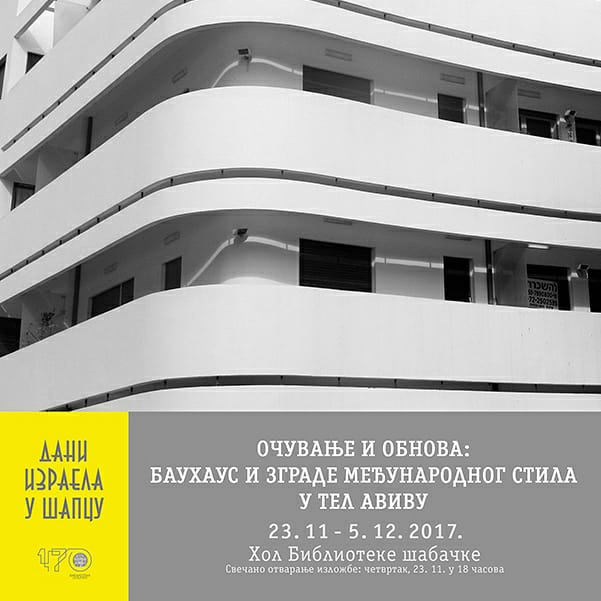 In the framework of the Day of Israel in Sabac, on Thursday, November 23, 2017, at 18:00 hrs in the Library Šabac, an exhibition of photographs Reconstruction and Preservation: Bauhaus and the International Style Building in Tel Aviv will be officially opened. The exhibition will be opened by Jelena Podgorac Jovanovic, director of the Sabac Library and Ambassador of Israel in Serbia, Alon Fischer-Kam.

26 photographs will be displayed at the Šabačka Library Gallery, which will present the preservation and restoration of bauhaus architecture in Israel, but this exhibition will also show the international style buildings in Tel Aviv. The exhibition was prepared by Miha Gros, while Zaron Levi was credited with design.

Tel Aviv is also known as the White City, because it is the capital of the bauhaus architecture. This modern, Mediterranean city preserves more than 4,000 buildings in this undisturbed style, clear lines, built by German architects of Jewish origin in the 1930s. These white bauhaus pearls of architecture are in Tel Aviv more than in all the cities of the world together, and a large number of them were included in UNESCO’s list of world cultural heritage in 2003. The Bauhaus Center from Tel Aviv, as part of its traveling exhibition, presents us some of the most representative buildings, this irresistible, minimalist style.