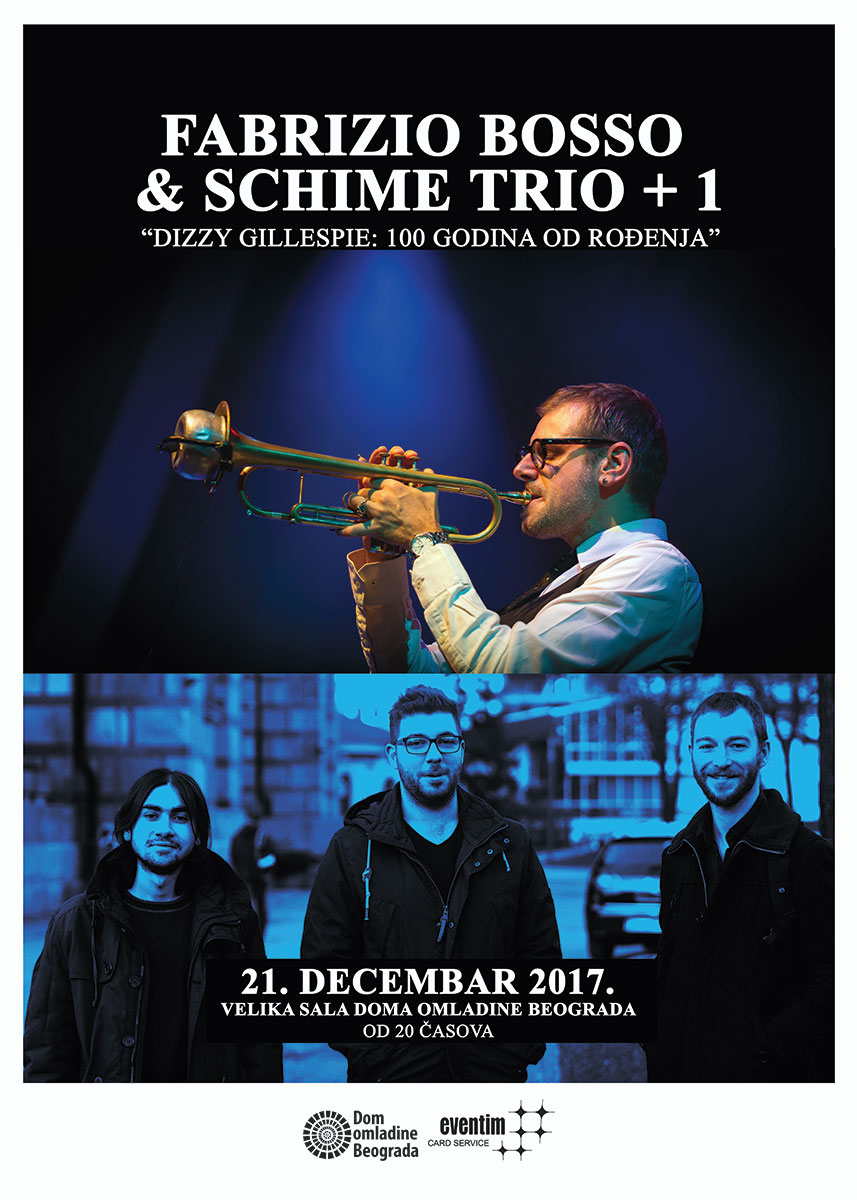 After the great success of the recently held 33rd Belgrade Jazz Festival, the Dom omladine Beograd for the end of the year presents to the local audience another outstanding international jazz concert. On the occasion of the 100th anniversary of the birth of Dizzy Gillespie, one of the most magnificent musicians in the complete jazz history, we will gather prominent names of the Italian and Serbian jazz scene: Fabrizio Bosso and Schima Trio + 1 will release Dissi in honor of a special program, a concert at the Great Hall of the Youth Center of Belgrade.

Tickets are pre-sold via EVENTIM network, at a price of 500 dinars.

One of the most legendary jazz musicians, Dizi Gilespi, was born on October 21, 1917, and belongs to the creators and mainstream bi-bapps, and with Louis Armstrong, he is considered to be the most important representative of the art of trumpet music. Since 1945, he has led his own ensembles, and has always been remembered for his unique style and bubbling faces while playing. He performed several times in Belgrade, and his concerts were remembered as great cultural events and festivities of top jazz.

The Belgrade Youth Center, as the organizer of the oldest and internationally most prestigious jazz festival, regularly organizes jazz concerts of different directions – from the most avant-garding to the most traditional, both domestic and foreign musicians, in its annual program between the two editions of the Belgrade Jazz Festival. This time, on the occasion of the very important and ceremonial anniversary in the world jazz frames, we will recall the most famous compositions of Dizi Gilespija in the version of the small ensemble, in the selection and interpretation of the famous Italian trumpeter of the middle generation Fabrice Bos, and prominent representatives of the Serbian jazz scene gathered in the set Schima Trio + 1 .

Fabricio Boso is well known on the international jazz scene, but also to the local audience, who met him as a dear guest of the Belgrade Jazz Festival in the great compositions of Nikola Konte, Stefan Di Batista and Charlie Heiden. Born in Turin in 1973, he started playing the trumpet for five years, and with 15 he finished the conservatory “Giuseppe Verdi” in Turin. He won the Top Jazz Award (Musica Jazz magazine) for the greatest new Italian talent in 1999. He is a multiple recipient, with many authors’ albums for the most distinguished publishers (Schema, Parco Della Musica, Verve / Universal), a regular participant in all the most prestigious European festivals. He collaborated with many distinguished colleagues, among whom, in addition to the above, Paolo Freso, Aldo Romano, Flavio Boltro, Mario Biondi … He is considered one of the undisputedly greatest stars of the Italian jazz scene.

At a concert in Belgrade with this international star performs one of our talented jazz bands: Schima Trio + 1, founded in 2015 in Belgrade. It is made by Luka Ignjatovic, saxophone; Predrag Milutinovic, drums and Boris Sainovic, double bass. After the release of the debut album “Do You Really Wanna Play?” (Metropolis, 2016), the band received a call to play at the Belgrade Jazz Festival, and it is expanding with the arrival of the keyboardist, Sava Miletić, for the first time, the band adopts the current name “Schive Trio + One “. The performance at the Belgrade Jazz Festival attracted the attention of local and foreign media who published great reviews, among which are particularly important ones published in the two most famous jazz magazines in the world: “Downbeat Magazine” and “All About Jazz”.

We invite you to a great musical feast for the end of 2017: a glimpse of the future of jazz to its most famous past!