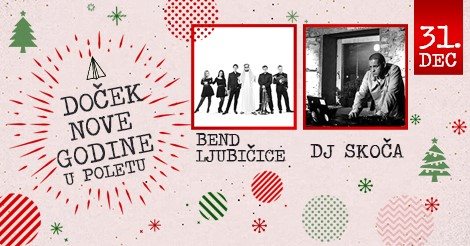 * We celebrate New Year’s Eve in Polet with the band Ljubičica and DJ Skoč! *

The characteristic sound of the band Ljubičica, whose backbone is made by brothers Stevanović, is built from a wide range of influences – from rock and roll to modern classical music. This irregular electro-spectacular spectacle and the brand behind which there are dozens of top musicians located on the move from Belgrade, via Pancevo, Hamburg, and Berkley. The core of the band consists of the brothers Petar and Vuk Stevanović, around which orbit the virtuoso of various profiles. The audience is known for the rock’n’roll album Ljubičica & Co, which they have reincarnated with their idols. There followed a collaboration with the Jesen Orchestra on the album “The Year in the Wind”, and then the Ecibibul Brass Album, which showed the avant-garde side of Violet. On the horizon, their next release, the marriage of electronic music, multi-vocal singing and tin winders, are visible. The bases will be dropped. During their long and colorful career, they collaborated with many artists, including Bill Drummond, Jesenji Orchestra, Jarboli, Svi na pod, Sajsi MC, Ilija Ludvig, Miša Peruničić, Buč Kesidi, The Cyclist Conspiracy, San fat women and others. The authors are music for feature film Second part as well as several short films. The walls of the studio are decorated with numerous awards and recognitions. They are a regular part of the setting at the Exit Festival, as well as many other events in the region.

At GistroPop evenings for several years, you can hear the music of all genres, and on the dance floor you meet people who rarely dance outside your room. On December 31st, for the first time on New Year’s Eve we will listen to GistroPop hits. In the summer you are waiting for the most beautiful songs from the year that just ends, as well as some Gistro evergreen classics: from indie rock, pop, pop, soula, folk, to some obscure disco hits, or songs that can not be classified into a genre. When you are finished with Russian salad and decide to escape from the fire, you should stop by Polet on December 31st. Musicman is jumping.