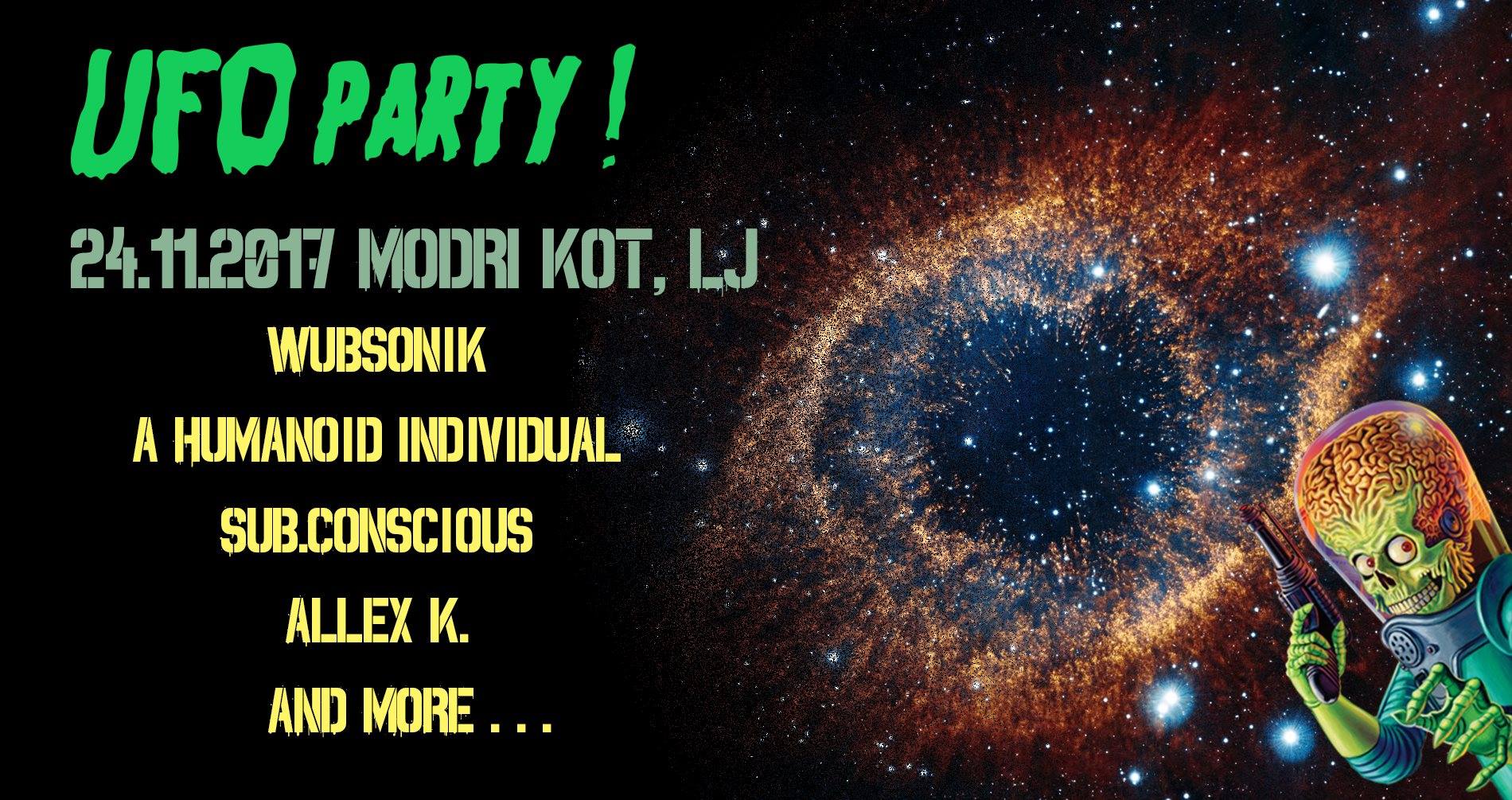 On Friday 24.11 you will witness alien visit. They will park their UFO in spaces of Modri Kot. Extraterrestrials are very flexible beings, that’s why they are preparing 2 stations, to find something for everyone. At one of the stations there will be TECHNO bangs, at the other DRUM and BASS will prevail. For the first time Modri kot will have 2 stages!!! In addition to galactic sounds and good atmosphere, aliens will take care of cosmic decoration of the space.

Entrance fee at the door: Voluntary donations, which are necessary to keep the place running.

WubSonik
After playing the bass guitar, he got familiar with electronic music and soon entered the world of Drum & Bass. His DJ sets are composed of funky rhythms, liquid melodies, and deep bass. He best treats your ears with liquid d’n’b, underground, dark deep, neurofunk and drumstep. He performs in alternative clubs all across Slovenia and has collaborated with numerous d’n’b groups, such as Drumwise, Vibe Department, Liquifi, Bass Fighters and others.
https://www.mixcloud.com/primozskulj1/

Sub.Conscious
Fresh hidden artist from Ljubljana. Sub.Conscious first moves were on the internet, where he proved his talent and passion for Drum & Bass. He played in many local underground clubs.Now his career is slowly moving into foreign countries like Germany.
https://soundcloud.com/subconsciousdnbslo

A Humanoid Individual
A Humanoid Individual ( Luka Grgić, 1992 ) is a DJ/artist from Ljubljana, Slovenia. He had a passion for music since he was little, but that passion started to manifest itself after he first visited a local event, where they host DJ’s. Since then he has been married to faders and knobs. His main style is Techno but he also produces Tech- House, minimal and drone music.
https://www.facebook.com/ahumanoidindividual/
https://soundcloud.com/humanoidindividual

Allex K.
Young artist from slovenija, who has started his career 9 years ago on local party since then his music path has started to develop on many levels. He was resident in ghetto club in town celje, he played along with many names in slovenian music industry. Aleksij, GT, Deyco, Greg Kutnar, Brlee, Veztax, Mary, Victoria Rebeka, Luke Sampller etc etc. His music sets are full of hard kicks, deep base lines and full of rhythmic inserts. He has stared with production and he is now finishing his first EP so be prepared for something fresh to come. His collaboration with his friend Berinio will bring a fresh wind of techno in slovenian and european music space.
https://www.mixcloud.com/Allex_K/