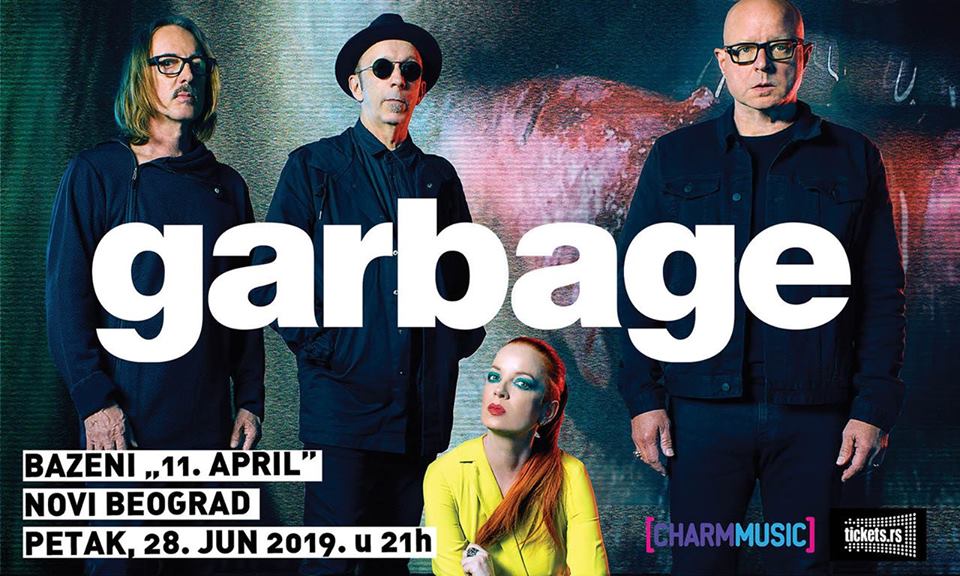 11.april, Belgrade, Serbia
28.Jun.2019
21:00BeogradSrbija
Do you like this event? Click on a button to like it!
The legendary GARBAGE finally comes to Belgrade! The long-awaited concert of this American rock band will be held at the Pools “April 11” in New Belgrade on June 28 at 21h!

✨The showrooms are on sale from Monday, March 11, via Ticketvision and online at www.tickets.rs. ✨
They are one of the most popular bands from the end of the nineties and the beginning of the two thousand years in the world as well as in Serbia. The last time they performed in our country in 2005 at EXIT, they had also announced concerts in the region, but they were not with us. After many years of waiting, Belgrade has been on the list of dates for 2019!
Garbage are Shirley Menson, Duke Erikson, Steve Marker and Buc Vig. Together they perform for 25 years. So far they have sold over 17 million albums and performed in over 35 countries. After Buck, Duke and Steve gathered in Medison (Wisconsin) in 1993 and a year later they joined Shirley, in 1995, they released the debut album “Garbage” which was sold in over 4 million copies. Their unique sound and provocative visual aesthetics have generated great public attention around the world and have brought them a tremendous success. The second album of the band, “Version 2.0” (1998), was also sold in over 4 million copies, he had great successes on the world’s top charts, as well as several nominations for Grammy, including the nomination for the album of the year. The following year, the band was on a world tour, and the highlight of the campaign that promoted the album was recording a title song for James Bond film “The World Is Not Enough”. Shortly afterwards, the platinum album “Beautiful Garbage” (2001), followed by “Bleed Like Me” (2005), and after a seven-year break, came the fifth studio edition of “Not Your Kind of People” (2012) Top 50 albums of the Rolling Stone magazine and it’s called “an alternative to everything” by the prestigious Pitchfork. Twenty years after their debut album, they celebrated the 20 Years Queer tour in 2015, their latest studio album, Strange Little Birds, announced in 2016, debuted at the top of the Billboard Top Rock and Alternative Album List, and was also on the 14th of the Billboard 200 list. In 2017, they published a well-accepted and read-out autobiography “This Is The Noise That Keeps Me Awake”, prepared by Jason Cohen, for which each member of the group wrote a part of the story, and immediately left and a joint tour of North America with the legendary Blondie group. Most of the year before, they performed on a tour of Europe, North America and Mexico celebrating 20 years since their second release, “Version 2.0.” They are currently working on a new, seventh album, which should end by the end of this year.
After many years of waiting, Garbage also included Belgrade on the list of dates for 2019. Be awake with the “noise” brought by this legendary American band, come to the Pools “April 11” on June 28th!