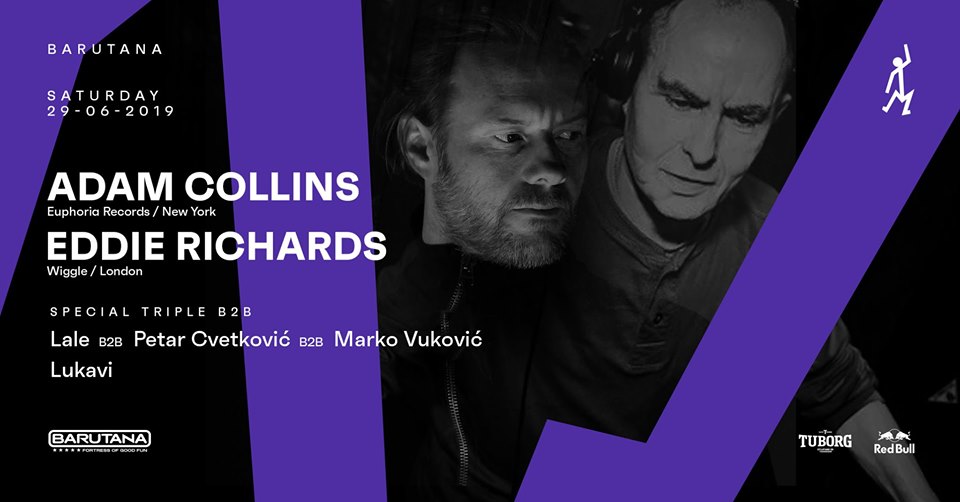 Kalemegdan, Belgrade, Serbia
29.Jun.2019
23:00BeogradSrbija
Do you like this event? Click on a button to like it!
The pioneer of the British house scene and the tech-house sound of the tech-house sound, as many call it, Eddie Evil Richards will perform on Saturday June 29 as a special guest of the popular party series Happy People Serious Fun. The evening will be joined by Adam Collins, producer and DJ from New York, as well as representatives of one of the pioneering local DJs Happy People: Lale, Petar Cvetkovic and Marko Vukovic in the special triple back2back set and Lukava.
Eddie Evil Richards is considered to be the founder of the London electronic scene, along with Terry Francis, as they worked together in the Swag Records music store. Eddie at that time became a key figure of the new musical direction and cultural movement that exploded around the world. How important is the British figure, and then on the world house and tech house scene, is best illustrated by the fact that since the mid-1980s it has been included in every book, documentary or film about electronic music, clubbing and raves. He started his DJ career at the beginning of the ’80s when he and his friend played local pubs. He soon became a resident of the Cameden Palace club in London, which at that time was the most modern British club on the reputation of New York Studio 54. Since 1988, Eddie Evil Richards has performed at the Heaven Club in London and the famous Hacienda in Manchester, as well was a resident of the legendary Clink Street parties and hedlajner legendary UK party called Sunrise. When he embarked on the production of music, his classic “Acidman” from 1988, came to UK Top 20. There followed equally successful remixes for Ralphi Rosario, Orbital and The Shamen. Eddie gained worldwide fame thanks to his flawless mix of deep bass techno with soulful house, and that’s the format he nurtured throughout his career, and he was rightly called a tech-house pioneer. Adam Collins is the founder of one of the legendary publishing houses – Euphoria Records. Since 1996 he has appeared under the name of the project OMNI AM, which was recognized by magazines URB, Muzik and XLR8R, and who soon gained his cult followers. Since then, Adam and his DJ House on Mute are happy to see hosts all over our planet, at clubs and at festivals such as Output, Space Ibiza, Mysteryland USA, Club Der Visionaere, Burning Man.