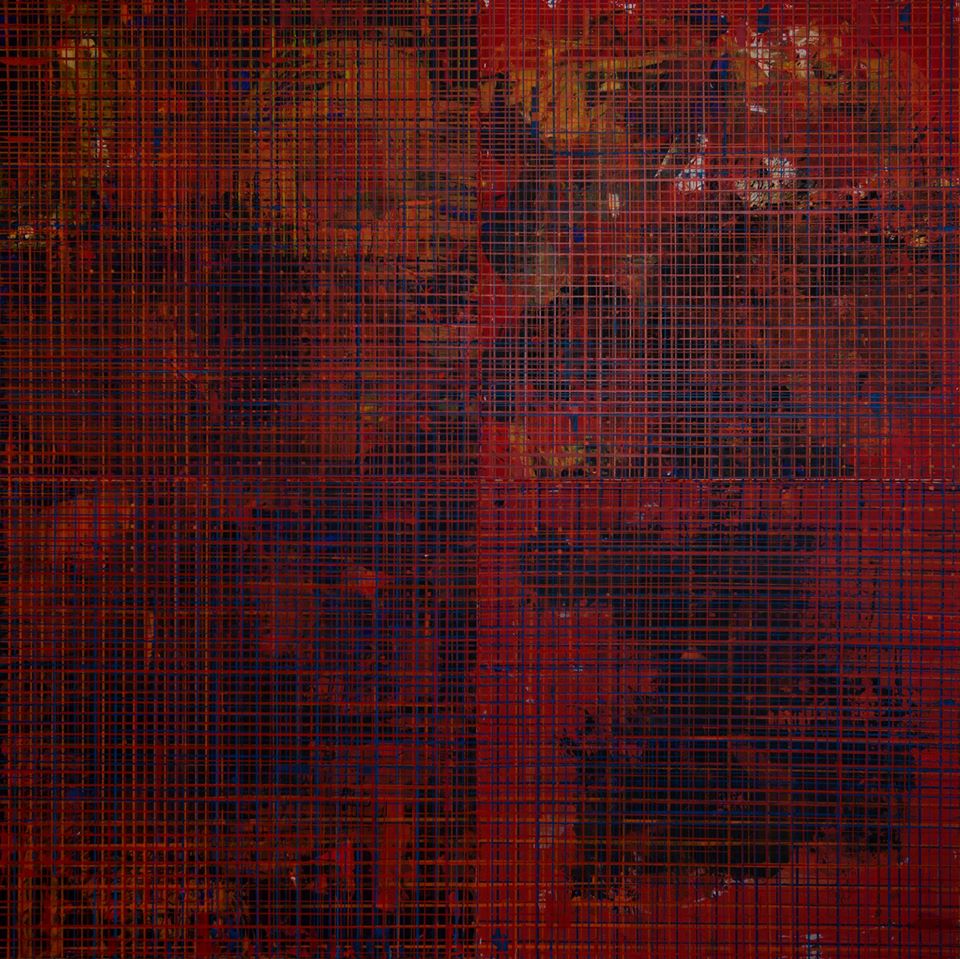 Megastructures is a cycle of paintings that reflect the evolution of visions stemming from the artist’s childhood, as well as the perfecting of a unique technological method used within the media, which has been derived from Chaos, an artwork that encapsulates the integral and comprehensive principle of the Gravity series of images. Chaos is a revival of unique past experiences, of curious mental landscapes that have obsessed the artist since childhood; emotional notes on the process of building an imaginary cosmos in which he is examining the possibilities of functioning. Mesh-systems bind spaces with layered coatings of colours that do not merge, but instead, suggest a third dimension where multiplication of microsystems can reappear and disappear into infinity. Lorenz demonstrated that there may be a structure to chaos, comprised of underlying patterns in which random occurrences are just an illusion. The artist constructs, completes, and then deconstructs that same organic world – ordered chaos in which megastructures create momentum within the rhythm of space and time. Insisting on precision, the impression of a binary reality is emulated in the desire for the painting to be a rounded process, like a perfect circle; after this comes deconstruction, allowing the structures to reappear in a cyclic rhythm from the very point of creation.

Colours have always been the focal point within the idea of chaos, as their vibrations stimulate emotions and force re-examining of the foundations of the sensory experience of the world around us, the summation of ones and zeros. Through his work, the artist questions what we perceive both as emotion and as reality. Webs on the surface emerge from the lavishness of the structure, appearing as a hologram of the world perceived within their depth; a reality of the image which gathers eternal fundamental emotions. An expressive, creative process derived from ‘action painting’, based on the exploration of all the elements of the image, ignores the usual phase of sketching. Moreover, centrality is not defined, but rather, the structure spreads out in all directions of the surface plane, further extending into a depth representing the dimension of time. On occasion, the paintings are created in parallel, allowing for a unified progression of the theme to occur through the variations of creation. This evolutionary process, at times, does not stop even with fifty layers of paint but continues until it comes to its end, one often determined by a moment of maturity or death, but, for Ladjušić, determined instead by the achievement of mood and timelessness.

Megastructures invokes synesthesia of the senses through the fusion of colour and time. By nature, colours are illusions; bioresonant flickerings of light that stimulate unique, and possibly different, perceptions within each of us. Awareness of the limits of our perception is important: knowledge of the sensory world relies on the contrasts that we encounter throughout nature, including the experience of space and time. The painting Red Sky is based on the study of blue and red as an inversion of colour symbolism, where red neither represents blood nor explosion, but instead, evokes calm; it is now the colour of the sky. Constructing layers of colour without fear of detracting from that which makes a certain plane its own is what leads to a further depth, one where the various layers bestow a three-dimensional field of view. The colours don’t appear flat since each shade plays with its opposite, creating unforeseen oscillations that mimic the flows of thinking and feeling. In this series, there is a technological advancement in the use of matte colours to create a rich contrast between light and matte surfaces. Light degrades black and grey, shades that pacify movement since within darkness there is no effect of light reviving billions of molecules bound within a colourless world. Mystical matte nuances, meanwhile, represent the interstitial space between the visible and invisible. Beneath the manifested layer of the physical world, the fear of the unknown is synonymous with dark matter and energy. Within these strange entities of the hidden world is where Michio Kaku finds the dimensions of space and loops of vibrating strings that connect different parts of the cosmos. The colour values of all wavelengths contribute to the construction of these structures, with an emphasis on yellow, orange and blue, which underline and carry each other. As in nature, where optimal colour combinations create key principles in the decoration of living organisms, reaching the right hue is like searching for the painting’s truth where every spacetime is lived through.

Megastructures denies the determinism of imagination and offers an alternate perception of reality. Infinite landscape spaces that have emerged from futuristic ideas get their appearance in the image medium (universe), which emerges out of chaos when colour vibrations trigger the release of visions akin to Green’s multiverses: alternative dimensions of the past, present and future that we cannot physically comprehend. The large-scale compositions represent cycles of creation – the beginning and end of a flow that is repeated indefinitely; a sunset which is the paradigm of not only death but also of rebirth, and in whose post-apocalyptic space the artist finds a distinct feeling that is vital in evading pessimism.