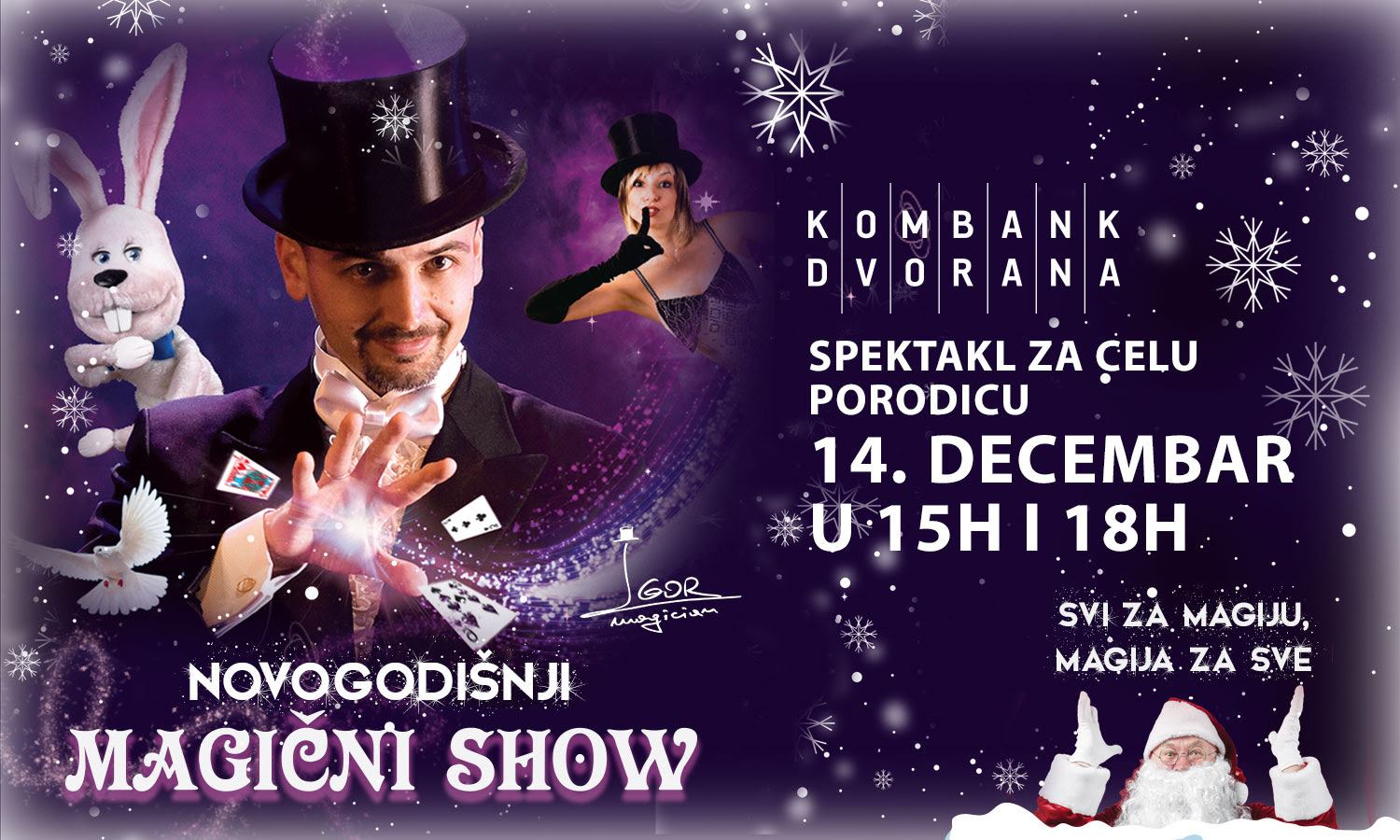 Kombank Dvorana, Dečanska, Belgrade, Serbia
14.Dec.2019
15:00BeogradSrbija
Do you like this event? Click on a button to like it!
SPectacle for the whole family again on the big stage!
After a seven-month break, the family spectacle ALL FOR MAGIC, MAGIC FOR ALL again at Kombank Hall on December 14th, in two terms: 3pm and 6pm. A double show for the whole family in one day will be organized by Igor Trifunov and his magical family.
The audience will see and experience the best illusions that the masters of their craft will perform together on the Grand Stage. There will be real miracles before the eyes of visitors: the creation of pigeons, the disappearance of an assistant, dresses that change color, levitations, teleportations … And imagine this, a white rabbit from a hat transforms into a human and performs tricks with the help of his magic carrot.
Of course, a New Year’s spell wouldn’t be complete without Santa Claus. And so see how Igor’s magical troupe will create this favorite kid hero in the middle of Kombank Hall.
The world-renowned magician Igor Trifunov on the eve of the spectacle at Kombank Hall says:

“I won 4th place at the 2015 Magician World Championships in Italy in 2015. After that great success, my world career began, I worked on various scenes around the world, side by side with the best and most famous magicians of our planet. with that new experience I am returning to Serbia to share new magical experiences with our audience. ”
In addition to Igor Trifunov, the play features: Ana Dimitrijevic – assistant without which one can not, Marko Markovic in the role of Rabbit, gentleman from the hat and Santa Claus personally.
The audience will be amazed, laughed at and delighted by the virtuosity of the performers, and children from the audience will have the opportunity to become little magicians.
This cheerful party will bring the audience into the world of true magic.
All for magic, magic for all!

BIOGRAPHY OF IGOR TRIFUNES
Igor Trifunov is the most successful magician and illusionist of the new generation. He won the Grand Prix at the Balkan Congress of Magicians
(Belgrade 2003 and Thessaloniki 2010) He has won many prestigious international awards (Maribor first place 2011, Baden first place2012, Abano Terme second place 2014, proclaimed the best entertainer at the International Magic Festival in Busan, South Korea 2016, Genevreet place 2017) children’s plays Igor’s magic show, then the TV series Street magic as well as illusionist performances Igor’s magic show. Having won fourth place at the World Championships in Rimini2015, she begins her international career with a unique spot on TV stations and stages around the world.