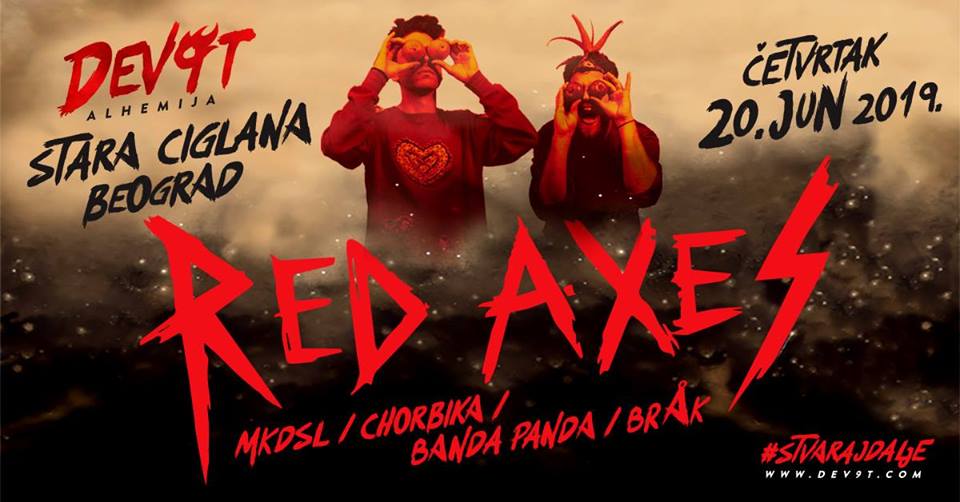 Ciglana Klub Ljubitelja teške industrije, Сланачки пут, Belgrade, Serbia
20.Jun.2019
17:00BeogradSrbija
Do you like this event? Click on a button to like it!
After performing at all of the leading festivals such as Amsterdam Dance Event, Glastonbury, Burning Man and EXIT, finally, the Israeli duo, Red Axes also comes to DEV9T! Do not miss to hear what a team we consider to be the leaders of the new waves! Their original sound, a mix of gigs and clubbing, the product is a rock and roll access to DJ-ing and live performances. Many put them in the category of post punk band, while for the second audience they are considered for the DJ tandem whose sets break up the leading clubs and festivals, calling them a phenomenon of the world scene, which indicates that there is a future of van house and techno standards. Red Axes inspiration is found in a disco, house, garage rock, post-punk, psychedelic rock and techno sound, and with its unique approach to electronics spread horizons and erase the boundaries between dance and alternative music. They announced dozens of singles, remixes and EPs, two albums and founded the publishing house called Garzen Records. The last Red Axes album, The Beach Goths (2017), is a true psychedelic adventure, a fusion of several different genres, and includes their distinctive combination of “rising guitars” and “blurred sints.” With Red Axes Burning and MKDSL, Chorbik, Banda Panda and Bråk! Do not let go of the last rays of the sun with these emperors! See you on Thursday, June 20, in Old Ciglany!