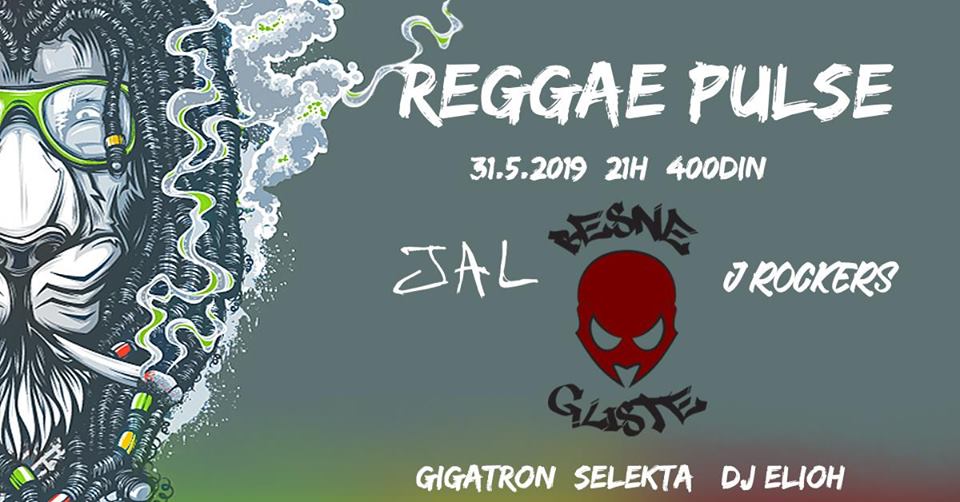 Ruzveltova 1, Belgrade, Serbia
31.May.2019
21:00BeogradSrbija
Do you like this event? Click on a button to like it!
Reggae Pulse is an event that takes place on May 31, at 9 pm, at Pulse Club (ex-underworld), located in the passage of the Vuk’s monument. The idea is to make a one-day festival devoted to re-music that lasts until late at night. We have prepared a program for you on two stacks, one of which will be reserved for bands, and the other will be dedicated to DJs, so that the party will not be stalled at any moment. The card will cost 400 dinars and it will be bought at the entrance to the club! You can look for more about the performers below!

Besne Gliste: Besne Gliste is a crossover band from Belgrade, created in 2010, whose music is based on reggae and hiphop sound, but they are also known for the fact that through this mix, hard and sharp Punk, HC and Metal guitars, monumental wind instruments parts, rocky Ska rhythms, as well as the ambient Dub sections that this eight-member family tirelessly and gladly shares in concerts. They have an album “ZugZwang” and a recently released album “Mechanism”.

Josip A Lisac: Bend JAL, founded in 2009 in Novi Sad, Serbia. As the initiator of the idea, the singer, songwriter and composer of most of the songs, Vedran Ferizović is set up, while the band signs all arrangements. JAL takes musicians of different performing styles and affinities, and thus their music can not be cut from the well-known rokenrol routes. Still, most of the creativity relies on ska / rege forms of irritations. Music styles, which in mutual contact extend the possibilities of alternative music of the first half of the first century, are also rock, blues, folk, jazz, punk … The sound image of this band consists of: drum, bass, electric guitar, keyboards, acoustic guitar and windscreen that is variable in according to the needs of a song or album. The texts deal with social, love, urban-philosophical topics using irony, poetry, rhyme, comparison, scarf, and most importantly the word of the word, which is one of the basic features of this composition, starting with the name itself. JAL’s band supports rock-clad multilayer and keeps pace with time, but nevertheless, their faith and ideals are part of the past in the past.
Discography: “The Last Samurai”, “I’ve Come Over the Year”, “Pali Ideali”, “With German to the World,” “Every Washing Time,” “In the direction of the wall”, “Eventualism”
J rockers:
Jovan J Knezevic frontmen of the famous Belgrade Reggae band Masta Basta has embarked on a new project called J rockers, surrounded by experienced musicians, decided to offer his new songs and new energy to your audience, which you will have the opportunity to hear premier on May 31!

Eliohh: elioH is a DJ, selector and mashup producer from Brazil. Growing up in different countries around the world, his mission has always been to bridge the cultural barrier with music and connect young people to the music that he deals with. His DJ sets feature elements of the hip-hop of the 90’s, reggae, dub, steppas, jungle and bass music.
After many appearances in Uruguay, Senegal and Canada, he has performed at major festivals in Serbia and Croatia, as well as in local locations in Belgrade and Novi Sad, with Dub Alibi (HR), Mental Freedom (BiH), Sepia (UK) , Rafael Aragon (FR), Shimana Sound System (IT), DJ Killo Killo (RS), Focus (RS), now on the Reggae pulse!

Ljubisa Gigatron Nikolic:
He has been playing music as a DJ since 2003 and since then he has been active both on the local and regional music scene. He has performed in cities throughout Serbia with performers and bands such as Hornsman Coyote, Jahmessenjah sound system, Natty Riddim Sound, Mak Floss, Chay Nelle, Rivah Jordan, Matthew Radics, Majestic Samity Sound, Natty Riddim Sound, Digitron Sound System, Shalamanda HiFi etc. He has also performed at many festivals such as Reggaeneration of the Danube, KOF, Ritual Fest, Love and Bes, EXIT festival, Revolution Festival. His performances feature excellent selection of roots reggae, new roots, dub and jungle music, and the main motive is the message of expansion awareness and indication of global political problems as well as a call for peace, love, tolerance and unity of all people.