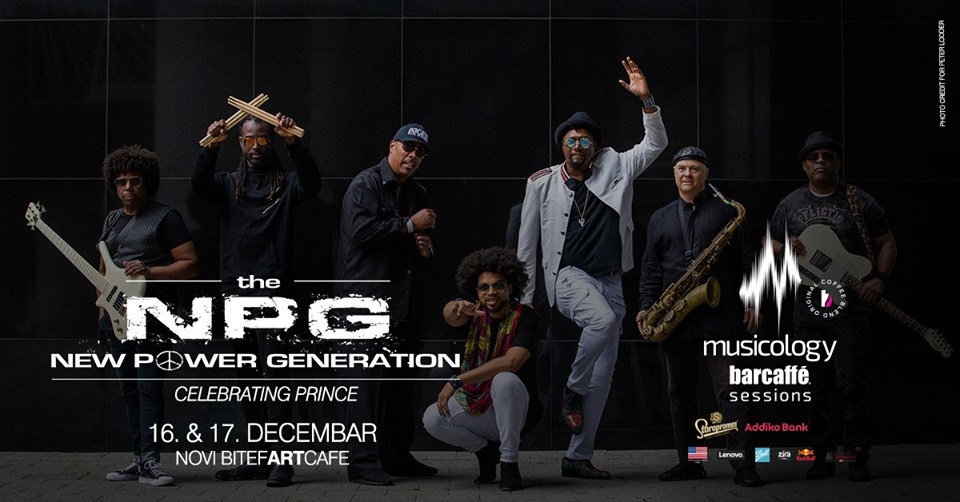 Bitef art cafe, Mitropolita Petra 8, Belgrade, Serbia
16.Dec.2019 - 17.Dec.2019
22:00BeogradSrbija
Do you like this event? Click on a button to like it!
The New Power Generation Celebrating Prince!
The Prince’s band’s concert, The New Power Generation, is the closest we can ever get to a legend called Prince.
Don’t miss the unprecedented musical spectacle that is celebrated by his legendary band, The New Power Generation, in honor of his frontman, mentor, brother and one of the greatest legends of the world music scene, Prince.
The New Power Generation will perform two concerts on December 16 and 17 at Belgrade’s Bitefartcafe Club as part of the Musicology Barcaffe Sessions concert series.
Former members of Prince’s band, The New Power Generation (NPG), after Prince’s death, reunited at an official tribute concert organized in honor of Prince in 2016. The keyboardist Morris Hayes, who was also in charge of this reunion, and Prince’s right-hand man and the band’s music director for years. He brought together members of the band’s original lineup while other musicians joined them as guests, resulting in an unforgettable musical celebration, which fans characterized as a performance that was both energetic and healing. The usual comment was that the concert was “just what we needed, now that Prince is no longer there.” Considering the enthusiasm of the audience and fans after this historically valuable concert, Morris, Sonny T, Tommy Barcarella, Tony M, Damon D and Levi Seacer met with one of Prince’s former managers to consider touring in honor of Prince’s life and his music. This is how the NPG tour with Prince songs was born. The band has since partnered with other top musicians – Prince’s colleagues, protégés, followers and students, to provide a special kind of tribute performance, thus celebrating a legend that will never be forgotten.
After being joined by various vocalists during the first year of the tour, NPG found what they were missing in their future singer, the charismatic MacKenzie. It’s a vocalist living in Los Angeles, but it’s originally from a small town in Virginia. With his fantastic vocal ability and energetic stage performance, MacKenzie automatically awakened the audience’s delight. Not trying to imitate the legend that was Prince, but showing him respect and honor with his authentic performance, he has earned a lot of respect from the audience. Like the rest of the band, pure and essential FANK evaporates from MacKenzi.
What characterizes NPGs is, above all, their philosophical approach. Rarely are musicians considered to have a work ethic as was the case with Prince. He was the performer who would take every bit of your attention live and redirect you to your performance. NPGs continue to play as though their “boss” is still on stage. Their performances are a continuous musical kaleidoscope of the most famous hits from all periods of Prince’s career.
When Prince formed the band in 1990, he personally wrote a press release to introduce NPG to the world, stating that his new band was the “best band ever”, which soon became the “funkiest band in the land.”
NPG represented not only the name of the band, but their entire philosophy that they wanted to convey to the world.

“Lay down your funky weapon, come join us on the floor. Making love and music is the only thing worth fighting 4. We r the new power generation, we want 2 change the world. The only thing that is in our way is in. Your old fashioned music, your old ideas, We’re sick and tired of telling us what to do. We r the New Power Generation ….. ”(Prince)
Lineup:
• MacKenzie – vocals
• Morris Hayes (MD