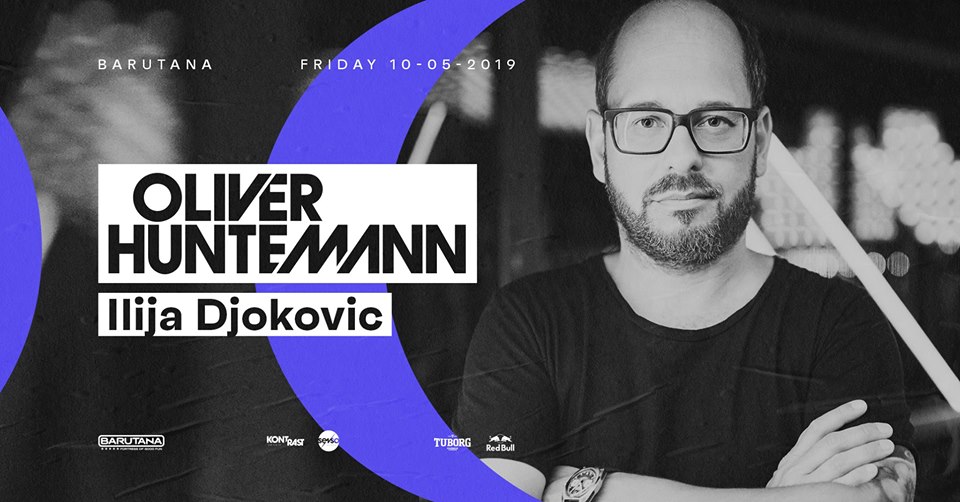 The big opening of the sixth season of the club Barutana is scheduled for Friday, May 10th

___________________________________________________ Oliver Huntemann is without a doubt one of the most attractive techno artists today. He started working with DJs only 14 years, and a production a few years later. Huntemann’s roots drag back to early techno sound. As with many of his colleagues, his path to techno sound went by the roundabout through electro and rave. And he, like all veterans, went through the stages of buying the first boards and discovering di-js that, turning out, significantly influenced his work. At the very beginning he organized an acid house event in Oldenburg. Although he moved to Hamburg in the mid-millennium, the city made a huge impact on him, and he, along with Frankfurt and Berlin, considered it the most important city in Germany where the expansion of electronic music took place in the 1990s. In his career for several decades, Oliver has five albums, about 30 singles, some great collaborations and remixes, which are still routinely on dance podiums all over the world. He is also the owner and co-owner of several influential labels, and these are well-known Confused Recordings, founded in 1995 and Ideal Audio, which he founded in 2008 with Jan Langer. The Senso Sounds publishing house and Contrast Artist was founded in 2014, while the first Senso Sounds Day and Night Open Air were held three years later, which raised them to an even higher level. Of course, we should not forget Huntemann’s legendary remix for the famous The Chemical Brothers, Depeche Mode, Benny Benassi and Underworld, while his collaboration with Dubfire has been going on for eight years (Elements, Dios, Diablo, Humano), and is also known for collaborations with Stephan Bodzin (Black Sun) In 2016, Oliver is a resident of the renowned Berlin club Watergate, and does not give up on performances by clubs and festivals all over the world: from Warung in Brazil, Rex Club in Paris, through the BPM Festival in Mexico, to Strawberry Fields and Let Em Eat Cake in Australia, as well as Woogie Weekend in California. His fifth album Propaganda was released in 2017, after two great EP Roticles and Poltergeist. All three editions are characterized by a pure and tense techno sound just what he can do. A limited number of tickets at a promotion of 700 dinars per parter and 1000 dinars for the VIP platform can be purchased through Ticketvision and Gigs Tix sales networks.