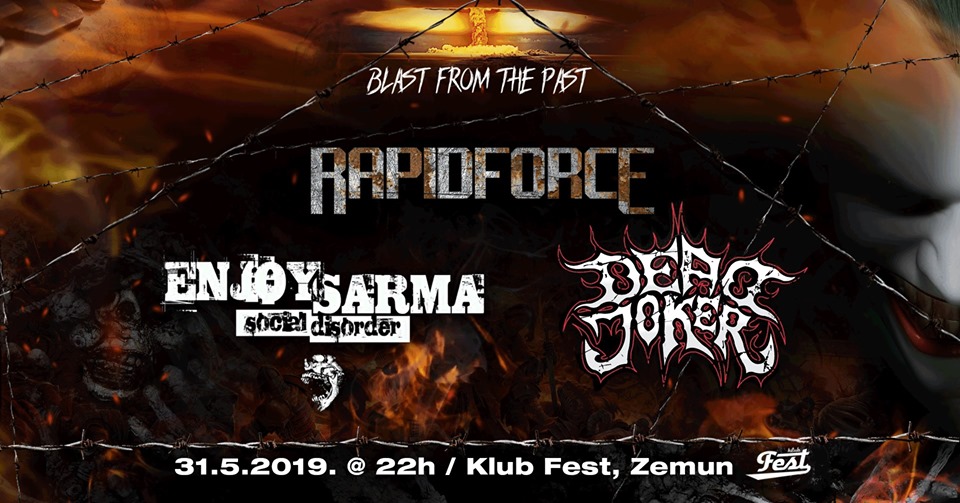 Gradski Park 2, Belgrade, Serbia
31.May.2019
22:00BeogradSrbija
Sviđa ti se ovaj događaj?
Blast from the past u Klubu Fest
Petak 31.maj od 22h
RAPIDFORCE is a Thrash Metal band formed in 1990.
It’s first recordings were taken same year in May, and contain 5 tracks which were later included in the first album. In June, the band begins with gigs, mostly in Serbia and Bosnia.

The first album „Apotheosis Of War“ was recorded early in 1993, released later that year on vinyl LP and early in 1994 on tape. After the release of this album, the band goes to a mini tour, which included performing at the great „BALKAN HORROR OPERA“ festival. Because of bad conditions in the country as well as financial problems, RAPIDFORCE stopped working in 1996.

It was only in 2000 that the band made it’s first serious steps, after a series of occasional gigs and member changes. The first important gig was in March 2001, at the „HEAVY METAL FESTIVAL“ in Belgrade. After that, the band made many performances across the country.

During 2002 RAPIDFORCE was recording its first promotional CD with 5 songs and a video clip for a song „Hero“. They made bigger public performances at „EXIT FESTIVAL“, Novi Sad in ’03, ’04 and finally at the new Metal Hammer stage in 2005 and ’06.(with Agnostic front, Madball, Moonspell, Dead Soil…) and in 2003. at the Budapest’s SZIGET FESTIVAL, in 2004. country’s biggest Belgrade BEER FEST festival (local Oktoberfest) and between all those happenings there were several gigs in local clubs. Also, Kosta Bogdanović – Guitars and ex-drummer Milan Jejina, played two times with Paul Di’Anno (ex-Iron Maiden singer) in Belgrade and Novi Sad in 2005, as a members of his support band and jamming with Max Cavalera and Dan Lilker (Ex-Anthrax, S.O.D., Nuclear Assault, Brutal Truth) on „EXIT FESTIVAL“, in 2006.
March 2nd 2006, RAPIDFORCE played with SOULFLY on their concert in Belgrade’s SKC, but on June 25th 2013 they played the biggest gig of his career so far, and that was before SLAYER in the Belgrade Arena.
Second album „Burst Under Pressure“ was completed in December 2007, and there are many variables of styles on it, incl. an authentic ethnic sounds. In January 2008 RAPIDFORCE signed a contract with Twilight Zone Records. The first album under this label was released in July 2008.