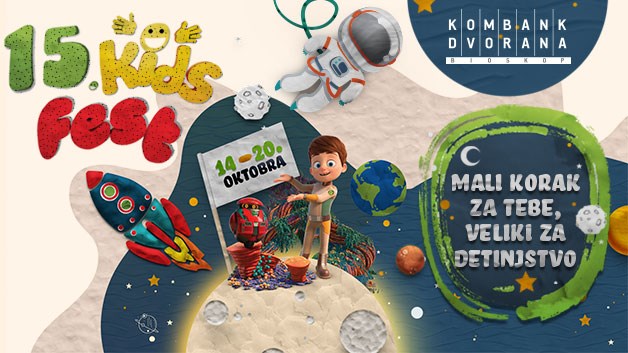 A small step for you, a big one for childhood!
The tradition of hosting a children’s film festival continues this fall, as the youngest audience – always interested in quality cultural content – demands it!
The most famous children’s film event KIDS FEST will be held for the 15th time in a row from October 14 to October 20, at the Kombank Theater cinema, and within the carefully selected film program, 19 of the highest quality films will be screened.
With the catchy slogan “A small step for you, a big one for your childhood”, the 15th KIDS FEST joins the world in celebrating its anniversary, celebrating a major historic event – the full 50 years since its first moon landing. Inspired by this unique stride, the themes of the moon, distant planets, small things, but in large parts this year’s children’s film festival aims to show educational films with true messages.
All seven days, curious audiences will be able to see animated and feature films, imaginative creations and 3D adventures shot in the midst of worldwide productions and co-productions, and will feature films from France, Belgium, Italy, and Northern Europe from this year’s KIDS FEST program. , Sweden, Denmark, Estonia, but also from the United States.
A large number of films have been synchronized into the Serbian language and, as in previous years, KIDS FEST has prepared a variety of programs aimed at teen audiences (ages 12 to 17).