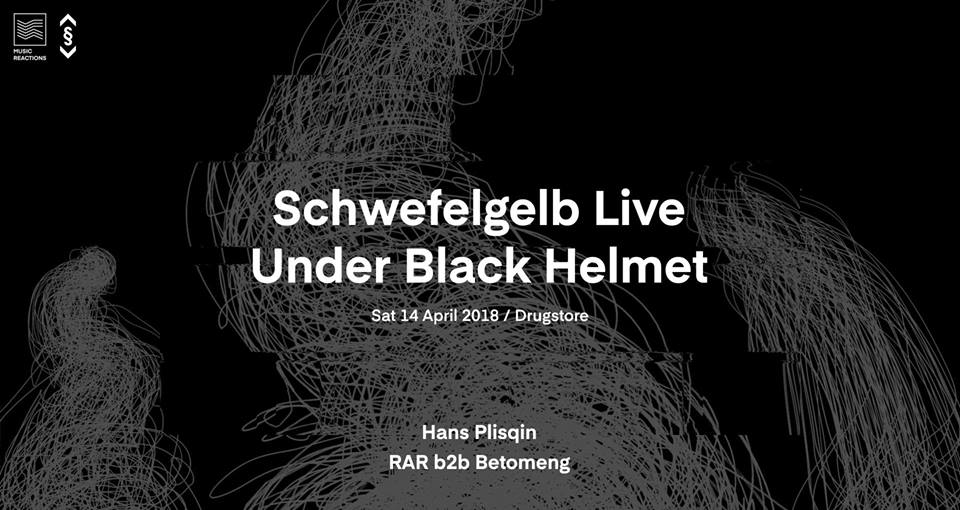 Music Reactions is an organization based in Belgrade – the town which never sleeps. Our motto is “quality before quantity” and we’re inviting you to join us in one of many sleepless nights with us. On this occasion Berlin-based Lithuanian artist, Julius Laurašonis, aka Under Black Helmet, and music duo Schwefelgelb (live act) will bring the freshest sound of Europe to our beloved “techno cathedral” – Drugstore Beograd!

Under Black Helmet
A protegee of Moerbeck’s expanding Code Is Law platform, the artist’s current surge into the shadowy realm of dance music has been further supported by Bas Mooy’s MORD label, setting up the producer as a fresh authority to be reckoned with. In addition to stand out all-night sets and back-to-back spots with Moerbeck that headline Code Is Law label nights, his burgeoning career has swiftly seen his bookings fall in alongside artists such as Dax J, Phase Fatale, Stanislav Tolkachev and Kobosil at all manner of venues across Europe. With his music already supported by the likes of Jeff Mills, Tommy Four Seven and Rebekah, the looming presence of Under Black Helmet is proliferating the warehouse and darkened corners of contemporary techno.

Schwefelgelb (Live)
Schwefelgelb is techno live act from Berlin in form of a band: Sid as singer, Eddy as man behind machines. Besides the sound, a visual staging is an essential element of their live shows, which they performed all over Europe and in Japan. Their previous EP “Dunkel vor den Augen uns” has been released on Gooiland Elektro (July 13) followed by the self-released single “Den Keller volllaufen” (December 13). Recently, they appeared as remixers on Haujobb’s „Input Error“-single (August 15) and Blac Kolor’s “Skele Ton” (January 16). These can be considered as precursors to their upcoming EP “Wie die Finger durch den Nebel”, which will be released on the debuting berlin-based EBM-label Fleisch by March 16.

For the entrée of the night in charge will be Deckadents and Parrish Monsters aficionado – Hans Plisqin. He’ll start this April’s Music Reactions Black event with special blend of esotheric electonic music and leftfield sounds to get you just in the right mood for what’s following. So, early birds, come early for some Midnight Confessions.

Music Reactions residents RAR and Betomeng will perform alongside our guests.