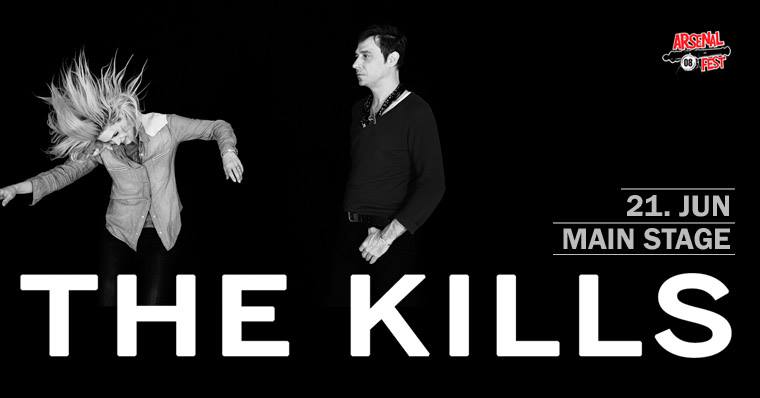 Indie rock band The Kills will play for the first time in Serbia on June 21 at the Main Stage of Arsenal Festa 08 in Kragujevac!

On the first night of Arsenal, on Main will be announced Editors and Dub Inc., join charismatic American singer Alison Mosshart and British guitarist Jamie Hince, who named The Kills five albums, concluding with the brilliant “Ash & Ice” (2016) , and read the hits “Doing It To Death”, “Tape Song”, “URA Fever”, “Cheap And Cheerfull” …

“I want to play everywhere where we are not yet … Tour bring me closer to people and because of that I have friends all over the world. I feel like a homeless man, but it’s not a bad thing. My home is where I sit,” says Alison.

The Kills just came up with the new song “List of Demands”, authored by American rapper Saul Williams, stressing that the processing is “a key compliment, proof of endless love and respect for the work of another artist.”

The Arsenal Fest 08 ticket for three nights cost only 2,000 dinars today! Since March 15, the set is 2,500 dinars, and individual tickets will be released, which will cost 1,500 dinars each night. The sale goes through the Eventim network, in the Youth Center Kragujevac and at the box office of the Children’s Theater in Kragujevac.

In addition to The Kills, Editors and Dub Inc., on the first night of June 21 at the Garden Stage are provocative Rijeka Let 3 and the former drummer of the legendary Ramones Marky Ramone, as well as the Sarajevo Summer Punch on June 23, while for Main on June 22 predicted Scottish hitmakers Texas and Balkan jeeps punk metal Kultur Shock.