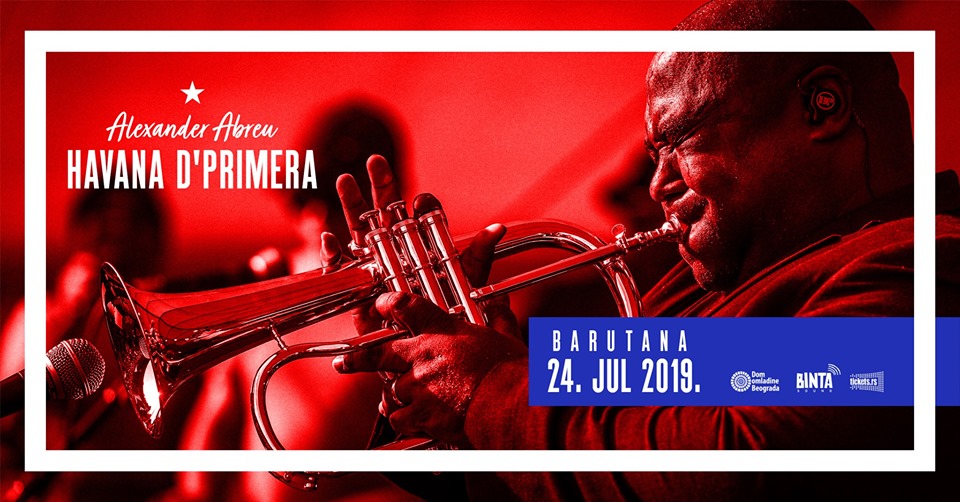 Kalemegdan, Belgrade, Serbia
24.Jul.2019
21:00BeogradSrbija
Do you like this event? Click on a button to like it!
The Youth Center of Belgrade in cooperation with the BINTA SOUND label represents the best Cuban salsa composition of the new generation – Havana D ‘Primera!
The concert will be held in Barutana, and the tickets for the price of 1500 rsd are pre-sold via the Ticketvision network.
Alexander Abreu, king of the trumpet, or as he is still called “the god of the wind”, and his orchestra of Havana D’Primera, have been the most popular Cuban orchestra in recent years, both on this island and in the world. Alexander Abreu is a charismatic young Cuban singer, the leader of a new generation of Cuban music, and at the same time a respected, multi-award winning jazz trumpeter. His Havana D’Primera Orchestra is made up of some of the best and most influential musicians, which, with the enormous popularity of salsa all over the world, is enough to announce a great spectacle for all fans of Latin sound!
In the current panorama of Cuban popular music, Alexander Abreu and the Havana D’Primera Orchestra are today the most populous group there, which equally delights critics and the public. The proofs for this are numerous awards: first and foremost, the “Cubadiscos Grand Prize”, which won the 2015, 2016 and 2017, the greatest recognition for the artistic work of the popular music orchestras in Cuba. This is globally confirmed by the Latin Grammy nomination in the best salsa album of 2018 for their latest album, Cantor del Pueblo!
Their reputation goes beyond the local frames and the number of people who follow their work is now measured by millions, thanks to social networks, television broadcasts, radio broadcasts, and frequent concerts. So far they have held hundreds of international concerts on all five continents and regularly perform in New York, Paris, Rome, Tokyo, Los Angeles, Buenos Aires, Montevideo. Everywhere filling the concert halls and raising the audience to their feet, their songs best represent where Cuban music has gone since the global success of the generation of old grandmasters from the Buena Vista compilation.
The Havana D’Primera Orchestra is at its peak: the previous CD “La Vuelta Al Mundo” brought them the greatest hit, the duet song of Alexander Abreu and the famous Louis Enrique. In December 2017, the DVD “Haciendo Histoire” was published, demonstrated the high quality of live performances by Alexander Abrua and an extraordinary 16 musicians accompanying him, while the latest release “Cantor del Pueblo” cemented the importance of the band and put it in the role of the Cube of the future!