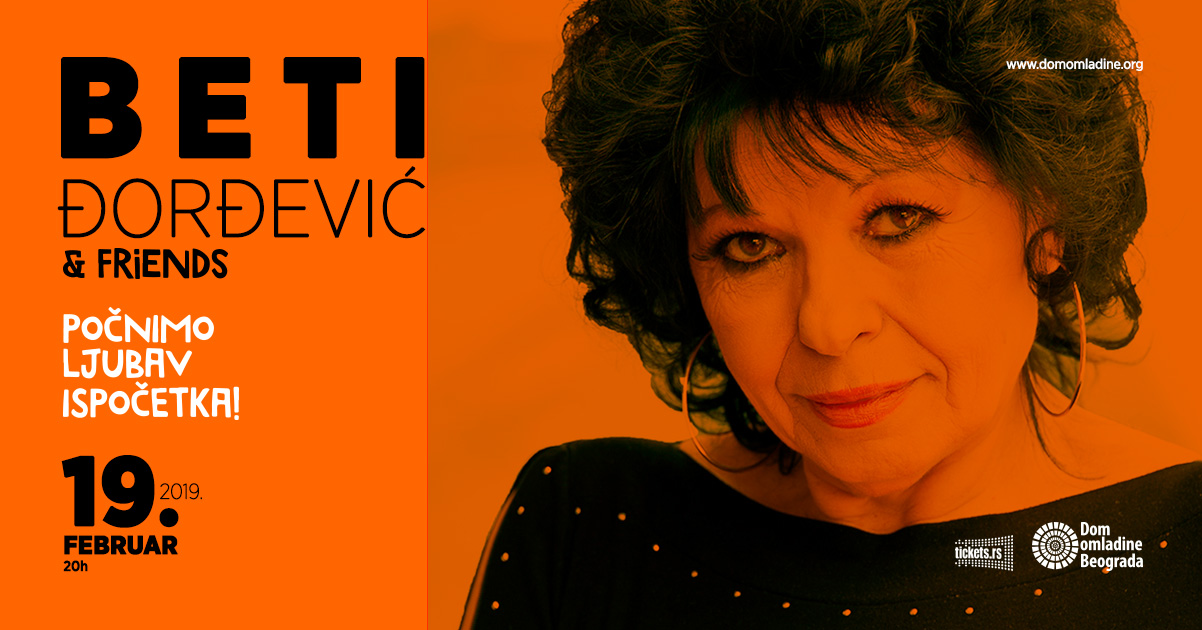 WE ARE LOVING LOVE OF LIFE!

Career Betty Djordjevic hides one of the most exciting life stories in the area. Ups and downs, craft from happiness to accident and back, brought her poems with a note of personal experience as little as a singing star in our area. And Beti and her unforgettable voice and otherwise represent a particularly treasured musical scene here. Beta Đorđević “baked her” craft at the site that was closest to the American club scene of the sixties and seventies – at clubs for US officers in West Germany at that time, featuring singing soul, jazz and fun repertoire. Classical tracks of the golden age of the American soul in the versions of Aretha Franklin, Dion Warwick, Diana Ross or Dajna Vosington, so in her interpretation they immediately checked the audience full of true connoisseurs, whom Beti proved from evening to evening. This unforgettable school turned the concert performance of Beti Djordjevic into a real sensation when she appeared in Belgrade in 1971, performing first in Topciderska noć, and then at the Hotel Jugoslavija club. Witnesses remember that they were waiting for the order to enter and feel the atmosphere of world entertainment, with current hits from the American top charts. A constant series of these crazy evenings that changed Belgrade’s musical image, eager to open up to the world, so entered Betty into a city legend and before she was celebrated at the then pop scene.

Thanks to the interest of the composer Aleksandar Korać, Beti Đorđević became a regular participant in Yugoslav music festivals during the seventies. Her hit “Let’s Start Love From The Beginning” from Belgrade Spring 1976, today is definitely the most famous track in her performance, the anthem of romantic positivism, which faithfully reflects the spirit of a time in which music was closer to man. During her career, she has published ten singles and two albums, before slowly slipping into oblivion until the end of the 1980s, as well as the entire mile of our Schlager music, overtaken by the onset of new musical forms, of which the turbo-folk was the most aggressive.

The interest in the music she performed was restored only after 2000, through the CD compilation of the biggest hits of Yugoslav entertainment music, where Beti Djordjevic had a remarkable place. The release of her tracks on radio stations and cafes presented Beti and some new audience, and the performance at the introductory concert of the Belgrade Jazz Festival in 2010 brought her successful return to the press with the program she performed in the Grand Casino, located at the site of her big of success – Hotel Jugoslavija. Club career Beti Djordjevic began to gain momentum again so that the television program “I Can All” (RTS) re-presented to the widest audience in the whole country, launching it as a classic pop artist from the best tradition of our music. The latest period in her career was crowned with the performance at Beovizija 2018, where together with Ramb Amadeus performed his author’s composition “No one”.

Beti Djordjevic will recap the whole career with the band “Friends” at a concert at the Belgrade Youth Center on February 19: the first part of the performance will be dedicated to her greatest hits in the field of entertaining music, while the other will present her great love – the chosen soul and jazz tracks. The unforgettable emotionality and great voice capabilities of this unique, authentic whale of our music scene will be a presentation in the best production at a place that is also related to the history of jazz music in our region.