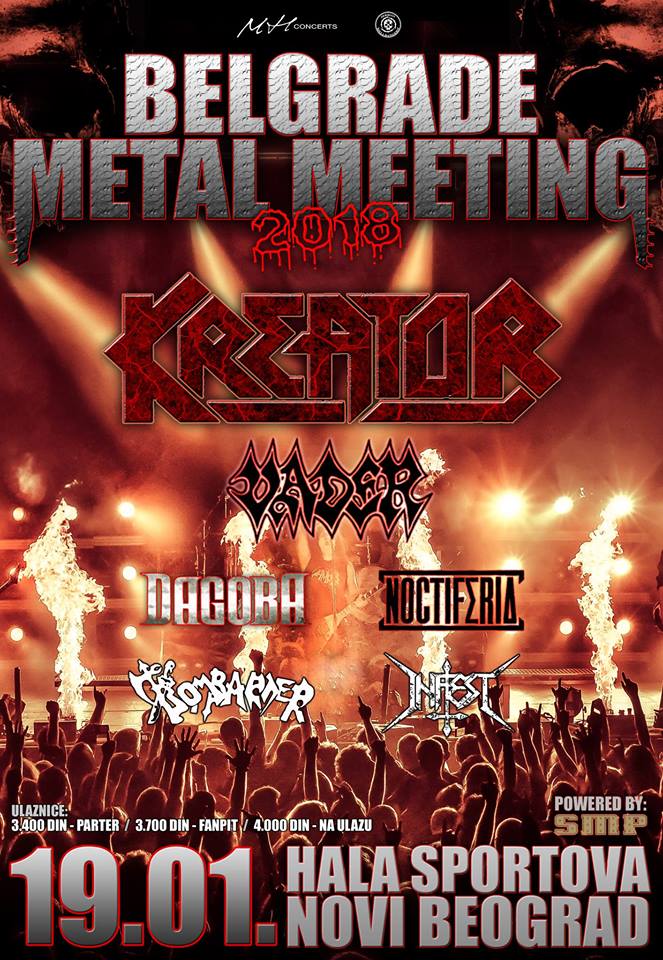 We are proud to present you the first Belgrade Metal Meeting festival.

German KREATOR does not need to be very special. Leading European thrash metal giants with a career spanning 35 years. This year they released the 14th album of Gods of Violence (Nuclear Blast), and in Belgrade they will perform as headliners and perform a regular set.

VADER is a favorite of domestic audiences and a band that has a strong base of dedicated fans in Serbia. Bend continues to promote his latest, 13th The Empire album, released for Nuclear Blast Records in 2016. At the concert in Belgrade, the band will perform a special The Ultimate Incantation set with which they celebrate the 25th anniversary of the release of their first album.

DAGOBA is on the stage for 20 years and besides Gojra, one of the most famous metal exporters from France. The raw combination of metal and electronics is their specialty. The concert will promote the new album Black Nova (Century Media).

Slovenian NOCTIFERIA is a composition with which our audience is well-acquainted. Their roots are in the death / black metal sound, and today they are experimenting with more modern metal solutions with the remnants of the industrial. As a very successful album they recorded Death Culture (2010) mixed by Peter Tägtgren (Hypocrisy, Pain, The Abyss Studio), and last year they released an acoustic album Transnatura featuring versions of old songs in the new arrangement.

The most powerful weapon of the domestic metal scene INFEST will perform at the Belgrade Metal Meeting festival. With the release of his fifth studio album Addicted to Flesh, this year, he bent his dominant status to the stage and will fully share the stage with the giants of the world metal scene.

In the year when I can proudly announce the release of new releases of their old legendary albums Speed ​​Kill and No Mercy, which have been waiting for several decades, the legends of the domestic scene BOMBARDER will join the vicious setting of the upcoming metal spectacle. At the same time, the official promotion of vinyl editions, which were exclusively published in America last month, will also be performed.

– Belgrade Metal Meeting plans to become a traditional festival, and on this occasion we invite fans of fierce sound to support our story and come to the metal in January – say the organizers.

Tickets are on sale since September 4th:
– at the price of 2,600 dinars (until October 1).
(Action tickets for fan pit are RASPRODATE!)

Sales outlets include Felix stores in Belgrade and Mungos in Novi Sad, as well as Eventim sales network.