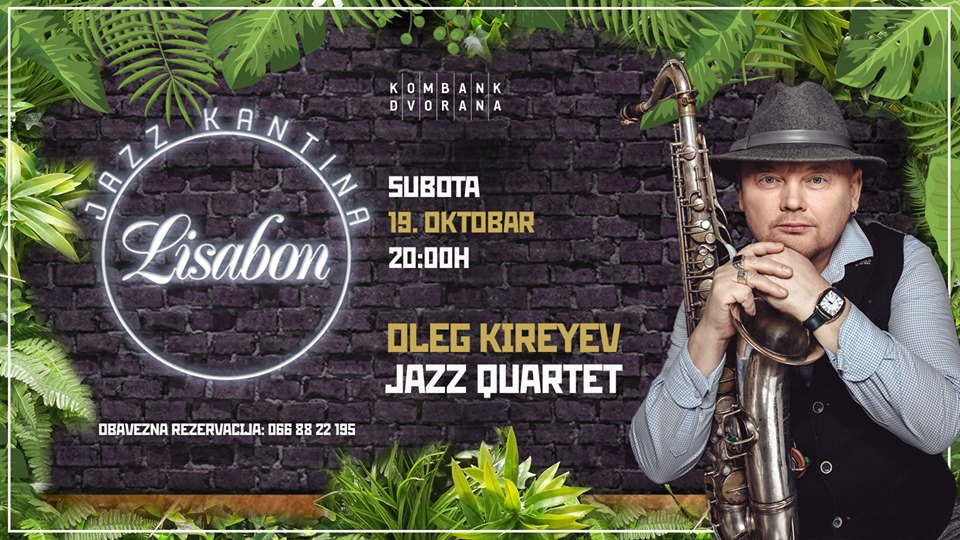 Čavketov pasaž, Belgrade, Serbia
19.Oct.2019
20:00BeogradSrbija
Do you like this event? Click on a button to like it!
The famous Russian saxophonist Oleg Kiriyev and his quartet will perform on October 19 at the Jazz Canteen in Lisbon.
The name of this extraordinary musician is already known to our audience, since Oleg has been performing in the Balkans since 2016. Thanks to a great deal of interest, after his first appearance in the Academy 28, he performed at the Nishville, Jazz Birthday, concerts at the Soul Society Club, SKC, as well as at Kolarac.
The musician performed with the famous Balkan pianist Vasil Hadzimanov, singer Jelena Jovovic … This musical jazz year in Serbia was marked by the concert of Oleg Kireyev and Vasil Hadzimanov at Kolarac.
Kiriyev appeared on the jazz scene in 1984. Since the 90’s he has been living and working all over Europe and America, which has left a striking mark on his music. Oleg Kireyev is considered a musician with a respectable biography: he studied in Poland, trained in America in the class of Bud Shank, performed with many notable jazz names (Tom Harell, Hal Galper, George Cables, Ben Williams and others), played all the prestigious jazz festivals in America and Europe.
His work has been crowned with over 15 albums of music from a range of jazz to traditional music of different climates.
Critics in America and Europe point out that Oleg Kireyev is one of the few musicians to easily combine different music genres and styles: from jazz in the 1920s to John Coltrane, from traditional to modern.
Come feel the emotional atmosphere, hear the divinely inspired saxophone sound of Oleg Kireyev !!