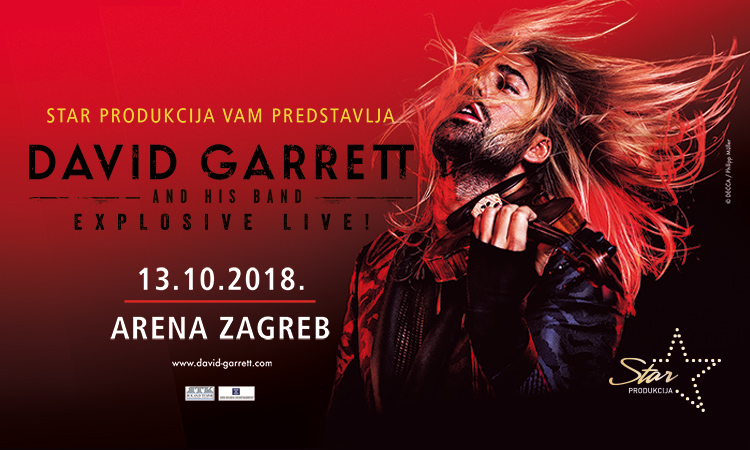 David Garrett
10/13/2018
As part of the “Explosive” tour in Croatia on October 13, a world-renowned musician is performing, who with skill and talent won the concert audience around the world

After stars such as Rod Stewart, Andrea Bocelli and Andre Rieu, the Star Production Autumn Festival organizes new musical treats! The first to come in October, when the German-American violinist David Garrett will perform as part of the Explosive tour in Zagreb. Although this is not his first performance in Zagreb, one of the most famous musicians of the younger generation will present the new musical expression to the audience for the first time:

“What makes Garrett best known is the combination of the charismatic rock star and fantastic talent, and often describe him as a classical music artist who blurs the boundaries between Mozart and Metallica. We are extremely pleased to bring him to Croatia, and we do not doubt that the local audience will recognize the magic of various musical genres in the performance of an impressive artist “- says director of Star Production Alen Ključe.

Garrett earned the nickname “Devil’s violinist” as an extraordinary skill, as well as his performance of the title song for a biographical film about the most famous virtuoso on the violin of all time Paganini. Since his first appearance with the Hamburg Philharmonic at the age of only 11, when German President Richard von Weizsäcker donated his first Stradivarius violin, he has sold more than three million albums to date and has won as many as 23 gold and 16 platinum awards worldwide. In the quarter-century of his career he has held more than 1500 concerts, and among his faithful fans include British Queen Elizabeth, former US President Barack Obama, German Chancellor Angela Merkel and many others. Twice he managed to set the world record at the speed of violin playing – in 2008 and 2010 Guiness World Records for 66.56, or 65.26 seconds, was defeated by Nikolai Rimsky-Korsakov’s “Bumber flight”. He is also a celebrated composer – he composed as many as 11 of his own compositions for the album on the occasion of the current tour.

These are just some of the most interesting facts from the life and career of David Garrett. Make sure that his charisma is on-site and book tickets in time for his Zagreb performance! Tickets are available at www.eventim.hr.