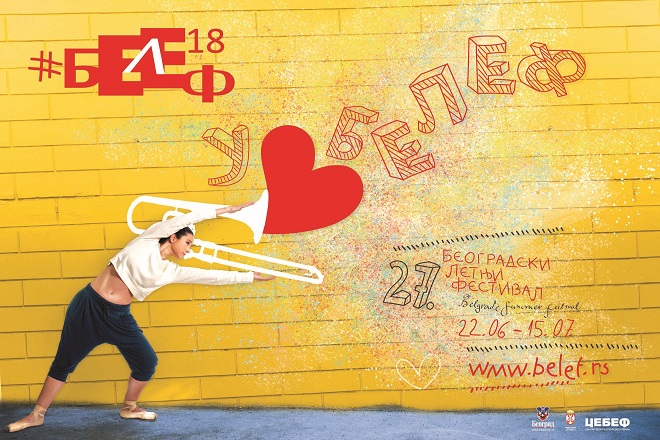 Opening of 27. BELEF
Friday, June 22 (20.00) – Kombank Hall
International Prodigy Orchestra And Choir (China)
The opening opening, led by BELEF Artistic Director Aleksandar Ilic and IPOC chief conductor Gin Fu, will show interdisciplinarity through dance, theater and orchestral music. The program of the orchestra emphasizes its distinctly international character which is in line with the reputation of BELEF as an international festival. The repertoire to perform the IPOC Orchestra includes: “Fantasy on Serbian themes”, Russian composer Nikolai Rimsky Korsakov; “Somerset Folk Songs”, English composer Ralph Vogan Williams; “Fanfare for an ordinary man”, American composer Aaron Copland; “Dance of the People of Jao”, Chinese composers Liu Tishan and Mao Juan as well as “Farandolu”, from the “Larlesen”, French composer Georges Bize.
BELEF, symbol of the Belgrade summer artistic paradise, will also feature internationally renowned singers such as the Serbian primadone Jasmine Trumbetas Petrovic, the opera champion of the National Theater in Belgrade, as well as singers who had also previously collaborated with the IPOC Orchestra Vanze Zhang, Zhongtao Li and Maria Jelic.
In addition to solo and duet with the orchestra, the ceremonial opening ceremony will be rounded off by a concert by the singer, dancer and orchestra gathered around the Serbian traditional song “There Far” and “Libiamo” from the opera “La Traviata”, the Italian chamber musician Giuseppe Verdi.

Saturday, June 23 (11.00) – SKC Garden
Dance Theater Velenje, Slovenia: Pipes Long Socks
After the show, the youngest visitors can take part in creative workshops. The workshops are set up so that children analyze the event and revive it through creative creation.
Suitable for children over five years of age.
The show lasts 35 minutes.

Saturday, June 23 (11.00) – SKC Garden
M. Borda, R. Koten, P. Menije: “Vivisekcija kredenca”, co-production SACD / Festival in Avignon – Theater of Bastille, France
The performance was created within the Sujets à vif program, as the SACD (French Association of Drama Authors) and the Festival in Avignon proposed to Pierre Menion and Raphael Koten to perform a joint piece. Based on the ideas of encounter and inventiveness, the program “Sujets à Vifs” invites two artists, who deal with different art practices and are not familiar with each other, to set up a 30-minute piece to be featured at the Avignon Festival. The original title in French, Buffet à vif, is inspired by the title of the “Sujets à vif” program, within which the performance was created, and as such can not be literally translated …

For all information and programs you can get information on 011 3236-530 or write mail to info@cebef.rs.