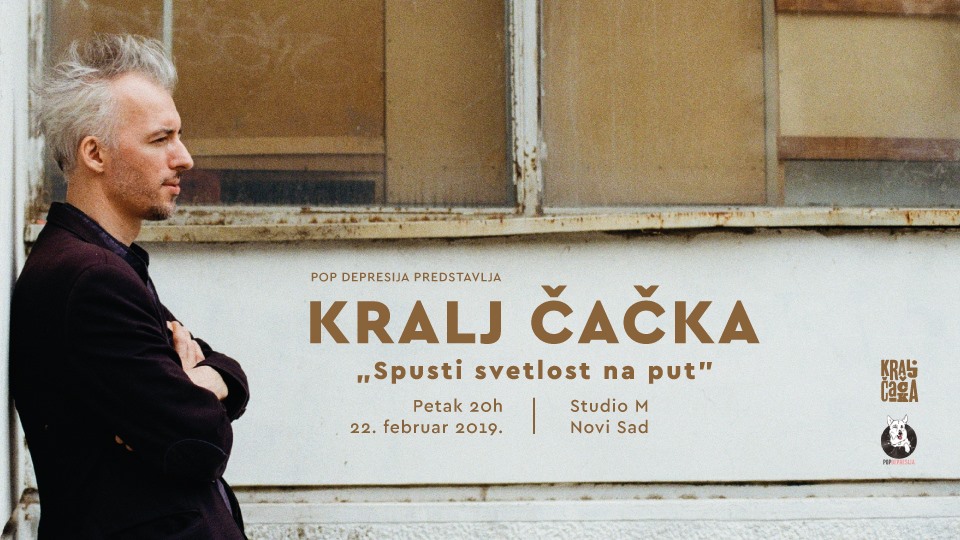 Radnička, Novi Sad, Serbia
22.Feb.2019
19:30Novi SadSrbija
Do you like this event? Click on a button to like it!
Kralj Čačka invites you to a concert that will be held on Friday, February 22 at 20h, in Novi Sad, in the cult area of Studio M, in which will promote the new album “Drop the light on the road”.
Tickets are pre-sold at all Gigstix sales outlets, as well as online at http://gigstix.com. The first 100 tickets are sold at a promotion of 1000rsd, after which the price of the ticket is 1200rsd. Cities are not numbered.

“Drop the light on the road” is the second album by King Čačak and was officially released in late November 2018. The first two singles from the album – the title song and “Mama buy me a propeller” – became the hit of the week in the choice of radio listeners 202. The last day In November, before the sold out Belgrade House of Youth, the album was promoted in the city where the King lives, and reviews that “Down Light on the Road” got together that it was one of the best albums that was published in the Serbian language in the 21st century.
For those who like references, the music of Kralj Cacak is a mixture of jazz, blouse, rock and chanson, and Zikica Simic told King Cacak: “The dangerous road – across the crossroads and beside the strangers – with the guitar over the shoulder, as a hero of old good films, Kralj He arrived at the rock scene. He brought wise, beautiful and bitter songs with him, in which sincerity and authenticity harshly contradict the distortions of this time. ”
Nenad Marić or Kralj Čačka is a painter, poet and co-author born in Čačak, who has lived and worked for several decades in Belgrade. He graduated in FLU in 2004, and as a painter he is most often expressed through watercolor. As a poet he published the collection “On the Margin” (Lom), and as a musician his first album (“Land of Dreams”) was presented to his public at the end of 2016, only a few weeks after the poetry debut. He won the “Strings of Light” awards for 2017, which is awarded for a special contribution to the affirmation of poetry in the hands and blues music. At the invitation of the directors Djordje Markovic, Kralj Cacka and Marko Maric, they made original music for the film “The Last Adventure of Cactus Bate”, which was premiered at the Sava Center in May 2018 at the opening of the Beldocs Festival.

****
Over the last three years, King Čačka has played at the biggest festivals in the country and the region: Exit, Arsenal fest, Ferragosto Jam, Mountain Music Fest, Arlemm, NS Concert of the Year, SOMUS … as well as special guest Darko Rundek before more than 10,000 spectators on Tashmajdan. For many visitors to his concerts, there is no dilemma: King Cacak is an uncroductive ruler of music that is difficult to classify in some category. His inspiration lies in that, for many, the perfect hideaway: between the deepest emotions and the art of playing, between the night in the smoky bar and the morning that changes everything, between the music of the traveling trumpets and the tangled jazz melodies. From that hideout, King Cacak goes to the main street and takes us on a journey around the world.
LINKOVISpain light on the road: https://www.youtube.com/watch?v=Xv7fThs84NM Land of Dreams: https://www.youtube.com/watch?v=qHGuRajuNOw Live Studio 6: https://www.youtube. com / watch? v = YebCpnnhriY
Bandcamp: https://popdepression.bandcamp.com Deezer: https://www.deezer.com/us/album/80324882
www.kraljcacka.rs