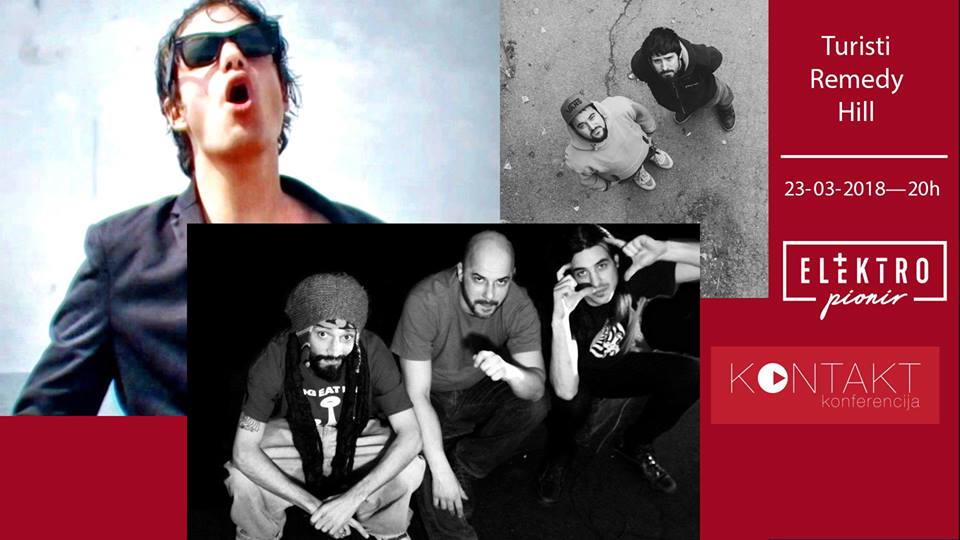 Third day Contact conferences at the Elektropionir Fire Brigade of exciting young bands. Hill, Group Tourists and Remedy are waiting for you!

Hill is an instrumental duo, founded in Belgrade in 2015. It consists of Darko Marinkovic (drums) and Aleksandar Apostolovski (bass and synthesizers). The music they create is based on stoner and sludge sound with the primes of noise, drone and psychedelic moments.
——
Remedy is the new band Nemanja Kojic Kojota, a prominent rock / reggae musician and former frontman of Eyesburn, formed along with band members Sharks Snakes & Planes, Vox Populi, Dead Ideas, Bandx and Sunshine. The trio, which sounds like as if at least twice as high, finished recording its first album, which is currently in the mixing phase, and we can expect it soon.

In addition to the founder, Bole is also the only permanent member of the band! Other members of the Tourist, like Bilet’s brother Jimmy, are coming and going … just like tourists on the way.

Tourists were born one night in the Belgrade neighborhood of Žarkovo, when Bole was inspired by love craziness and delta blouse started playing acoustic guitar in his short room. His brother Nikola Džimi Mijušković joined him immediately and in just a few days songs for the first album Turista were made. Inspired by the delta blues, Bo Didley and early rock’n’roll, Tourists are not afraid of traveling to all sub-genres of rock music that have influenced Bole. And the punk, and hardcore and postpank as the genres from which it came out, but also the darker and raw blues and jazz music, experimenting with African and avant-garde rhythms and computer programmed music … make the Tourist a unique phenomenon on the music scene of Belgrade.

Tourists are short and clear. Direct. And the musical journey that leads us is the destination that each listener will want to return. Again. And again. And again…